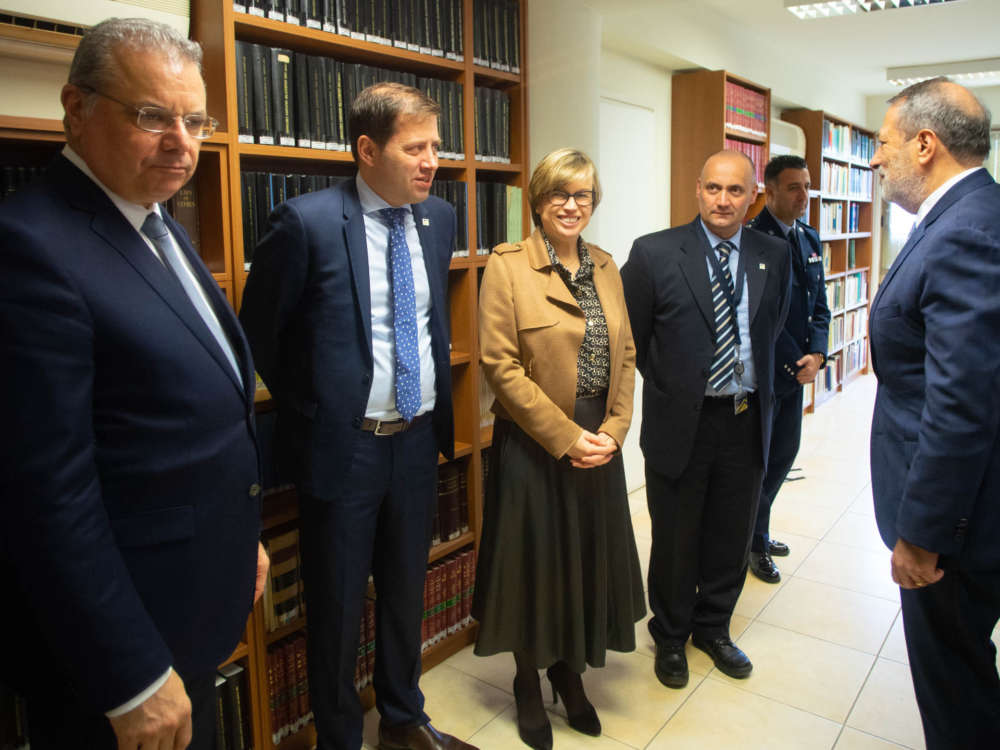 The reinforcement of Cyprus’ capacity to handle matters of national security connected to a surge in migration was the main subject of a meeting between Minister of Justice George Savvides, Minister of Interior Nicos Nouris, and Europol’s Executive Director Catherine De Bolle that was held earlier today at the Ministry of Justice.

Savvides said that views were exchanged regarding migration-related challenges, including the deployment of Europol’s Guest Officers in Cyprus to support the processing of information and assist with checks.

“We recommended the extension of the body’s service to a longer period, and have also requested its increase in numbers,” he said.

Savvides said that they also discussed the potential of a collaboration between Turkey and all EU members, including Cyprus,  for the reduction of migrant inflows.

Nouris described the meeting as particularly interesting, stating that “we raised our concerns with Europol, including the illegal arrivals from the ceasfire line. We have requested the maximum help Europol can offer to monitor migrant inflows, but mostly to tackle security matters. The Republic of Cyprus needs maximum contribution from the EU and all competent authorities, including Europol, towards that end.”

Nouris concluded by saying that Europol has assured that it will stand by Cyprus’ side to deal with these challenges.

On behalf of Europol, De Bolle said that it’s fully aware of the issues the Cypriot Police is called to deal with, and strongly believes that the only way forward is the joining of forces between Europol and Cyprus to tackle criminal elements.

De Bolle also praised the high levels of professionalism of the Cypriot police and emphasised the important role of Cyprus for the EU’s internal security via the safeguarding of its external borders, assuring of Europol’s full support to the Cypriot authorities.

“What Cyprus is doing here is very important for the security of all member-states. Europol is ready to provide support at the request of the Republic of Cyprus,” she said in a statement following the meeting.

“Europol’s role is to boost security checks aiming to track suspected terrorists. We also support Cyprus’ continuous efforts to dismantle organised crime networks involved in the smuggling of migrants and to prevent terrorism.

“Cyprus carries a great responsibility in this area and is an important Europol partner,” she added.

It was also mentioned that Cyprus has taken part in many large-scale international operations with Europol in 2019, including an operation in the West Balkans in September targeting organised crime groups involved in drug and arms trafficking, fraud, and the smuggling of migrants.

The Chief of Police stated that the Europol Executive Director’s visit is proof of the close relationship between the Cyprus Police and Europol.

“Our continuous and productive collaboration with Europol is proof of our dedication to European objectives for the security of member-states as well as our own citizens.

“Collaboration with Europol has boosted the police’s capabilities in dealing with contemporary challenges in all aspects of its mission, including in the areas of training and exchange of information.

“We would not have such capabilities alone. This is the value of our participation in the EU,” Michaelides added.

During the meeting, Michaelides informed De Bolle on the effects on the island of the increased influx of migrants from the sea and along the ceasefire line, noting that while immigration is an issue that preoccupies most European countries, it is South Europe that faces the most pressure.

Especially in the last three years, he said, Cyprus has handled a great number of migrants that is disproportionate to its size, saying that in 2019 more than 12,000 new asylum applications were submitted.

“We need solidarity from the rest of the EU to handle irregular migration effectively, as increased migration inevitably leads to public order and security concerns,” he said in the meeting.

The Europol chief was also provided with detailed data on human trafficking, including numbers, origins, and modus operandi.

Michaelides concluded by emphasising that international peace, justice, security and prosperity can only be achieved through collaboration between all EU member states.

Story photo: Ministry of Justice, Nicosia, Cyprus. The Minister of Justice and Public Order,  George Savvides, presides over a meeting with the Minister of Interior, Nicos Nouris, and the Executive Director of Europol, Catherine De Bolle.