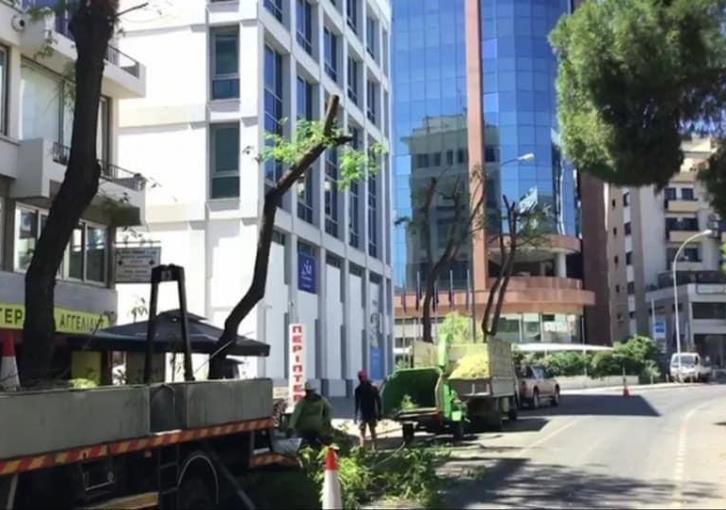 Nicosia Municipality has defended the pruning of trees on Pindarou Street which it said was necessary for safety reasons and would actually revitalise the trees.

In a statement, it said that the pruning was initially planned for March but was delayed because of the lockdown following the coronavirus outbreak.

The municipality’s statement follows strong protests from the Greens who branded the move as criminal.

The municipality said that in recent years the size of the trees was increasingly creating health and safety problems for resident and passersby. It said it was the frequent recipient of complaints from residents that rodents were entering their apartments from the trees while branches had been severed during extreme weather, damaging cars and buildings.

For safety reasons it was necessary to renew the crown of the tree occasionally in order to renew the foliage. At the same time, this prevent the roots vertical growth of the roots which damages the water supply system and other infrastructure, the municipality argued.

“We appreciate that this is a big aesthetic change, but the pruning will not affect the growth of the trees which according to the advice of the agronomists will soon grow new leaves,” the municipality said.

This practice has been successfully used in other areas of Nicosia (Makarios, Evagorou, Stasinou, Salaminos, area of the House of Representatives etc) and the trees have grown, it said.

The municipality also noted that several years ago it had been agreed with government and other services that after new road works, a different type of trees are planted whose roots are directed to a greater depth to avoid damage to public utilities and pavements. This has been the case for Stasicratous, Mnasiadou, Zenas Kanther and Theophani Theodotou where  270 new trees have been planted while another 300 will be planted with completion of work on Makarios Avenue, it said.

In addition, 230 trees will be planted on Kallipoleos and 85 on Kyriakou Matsi avenue.

Overall, since 2015 and with the completion of the projects planned in the next two years a total of 5000 trees will be planted as part of the municipality’s policies to combat climate change and enhance green areas in the capital, the announcement concluded.