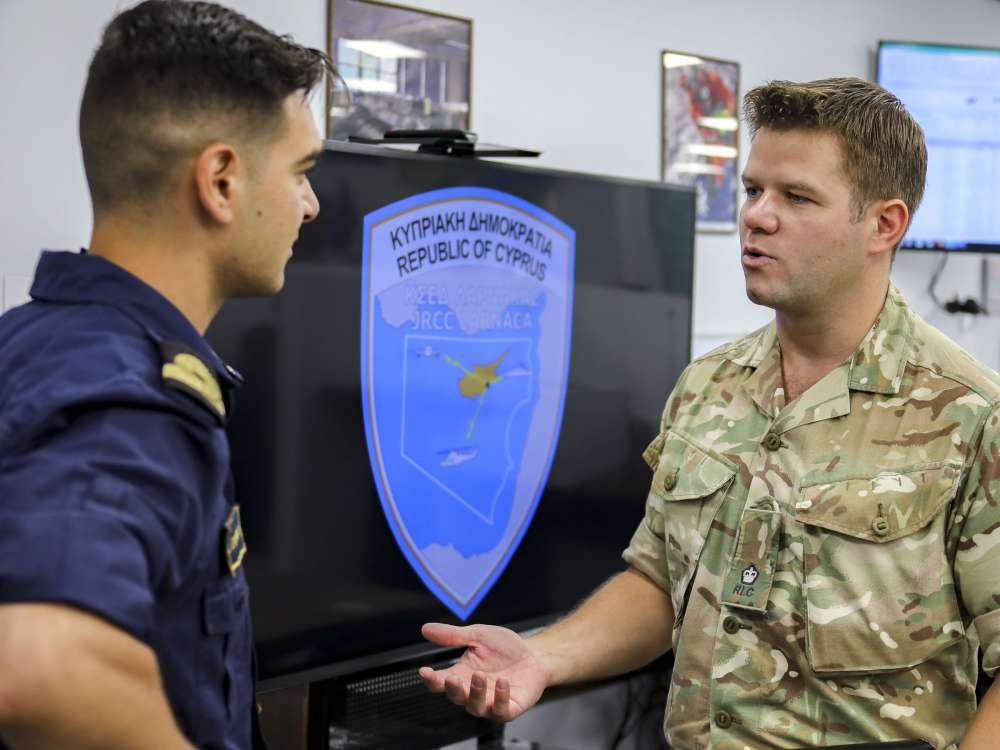 Bases officials and the National Guard in Cyprus have hailed the working relationship between the two organisations after another successful Exercise Argonaut concluded last week.

The annual multi-national Non-combatant Evacuation Operation (NEO) exercise, which is led by the Republic of Cyprus, saw 16 nations – plus representatives from the EU – take part in the challenging two-phase scenario, which included search and rescue.

The exercise, which has become a regional flagship event, aims to test the capabilities of multiple nations to work together should a NEO be required.

British Forces Cyprus’, Major Jamie Cameron, who played a key role in the planning and coordination aspect of Argonaut, said despite the normal challenges of bringing multiple nations together for an exercise of this size, he was extremely happy with the end result.

Speaking after the conclusion of the final phase of the exercise, he said: “Looking back at it now I would have to say it was a success and that we met all of our training objectives.

“Every year the exercise makes improvements as the scenario and our working practices are refined, so I am very happy with the end product.

“Of course, there were challenges along the way because that is the very nature of what we do. We have to try new things, introduce new practices and overcome any challenges and that was definitely the case this year.”

And in looking ahead to next year’s exercise, Major Cameron said he was looking forward to working closely with colleagues from the participating nations and of course the Republic of Cyprus in particular.

“We have a great relationship with the National Guard and the Joint Rescue Coordination Centre who ran the Search and Rescue phase of the exercise and every year that relationship continues to grow and improve as we learn more about our ways of working.”

Lieutenant Colonel Loukas Hadjicontsantis, exercise director for Argonaut, was equally as positive and he too was keen to focus on the relationship between both BFC and the National Guard.

He explained: “We have a perfect relationship, the communication between the Bases and us is excellent. We have very open communications and in situations where we encounter any problems, this allows us to quickly solve them and that is very important during this exercise.

“The exercise itself has proved very useful and very successful. Of course, there are always challenges during any exercise that involves so many nations but after the evacuation of Lebanon in 2006, we realised that we must all be more coordinated as a group of nations and that is what Exercise Argonaut has allowed us to become.

“We live in an important area and we must all work together well and that has been achieved.”

Both Major Cameron and Lt Col Hadjicostantis hailed the success of the search and rescue aspect of Argonaut and playing a major role in that phase was the crew from RAF Akrotiri’s 84 Squadron.

Officer Commanding, Squadron Leader Alan Ross, who was involved himself, said whilst the exercise was very useful to test capabilities, it was the engagement aspect before it began that proved most useful.

He explained: “It all went extremely well from our point of view but what we found most beneficial was to be able to meet the crews of the other nations involved to get to know them and discuss the working practices.

“Multi-nation exercises and operations can be very challenging because we all do things differently, so to be able to sit and talk things through was so valuable to our crew.

“We are working with other nations more and more, so we were very happy to be involved in Exercise Argonaut in order to see how we can all be more cohesive in our efforts to preserve and save lives should this happen for real.”