Mosaics from Kanakaria Church have been located 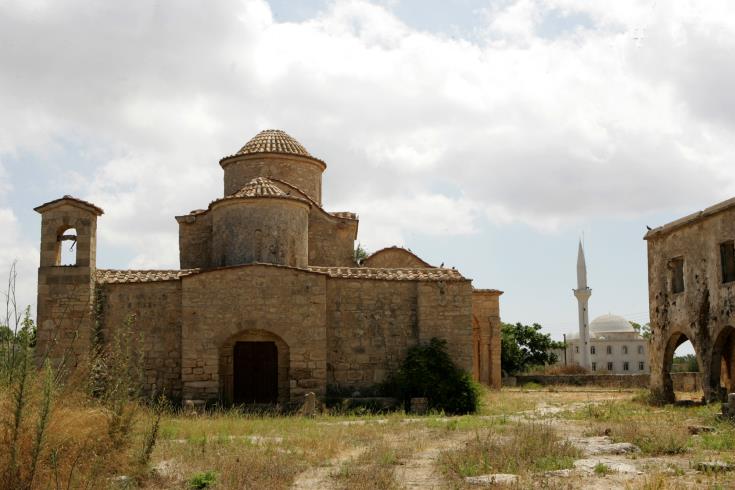 The mosaic depicting Apostle Mark and the fragment showing part of Christ’s depiction from the Church of Kanakaria have been located, according to The Walk of Truth, a non-profit organization which calls on the authorities to work towards having the last mosaic fragments from the Church included in Interpol’s list of stolen artworks.

Announcing the location of the mosaic, The Walk of Truth and Cultural Crime Watchers Worldwide also welcome the repatriation of the mosaic fragment depicting the Apostle Andreas, originating from the Church of Panagia Kanakaria in Turkish-occupied Lythrankomi. The mosaic, that had been sold by Turkish antiquity smuggler, Aydin Dikman, was hidden despite immense publicity over their return.

The Foundation expresses the view that anyone having Kanakaria mosaics in their possession cannot demand money for their return “because the publicity over the looting of the church and its mosaics, brutally removed and sold abroad, has been extensive worldwide”.

The network of volunteers and experts of the Walk of Truth organization, including foreign policemen, has located earlier mosaics from the same church (including that of the Apostle Andreas) but both the Church and the Government of Cyprus were opposed to paying money for their repatriation, something with which the Foundation completely agrees with.

Walk of Truth founder, Tasoula Hadjitofi, notes it is sad that Cyprus had had to pay an amount of money, albeit symbolic, for the return of the fragment depicting Apostle Andreas and adds that if the Church has changed its policy and paying money for the repatriation of stolen treasures is now “a designated practice, then the Walk of Truth is in position to contribute to the repatriation of the mosaic showing the Apostle Mark from the Church of Kanakaria as the owner-collector abroad refuses to deliver it without being paid a symbolic amount of money”.

According to the Foundation, the mosaic fragment showing part of Christ’s depiction (lower part) from the same church, has been immured into a wall in the house of a citizen abroad, who is now in prison for murder. “The competent State authorities should work towards having the last mosaic fragments from the Church of Kanakaria (Apostle Mark and the fragment depicting the lower part of Christ”) included in Interpol’s list of stolen artworks; omission to do so renders its repatriation a more difficult task.

In 1997 the German authorities and Interpol managed to find and seize in two apartments of the Turkish smuggler Aydin Dikmen in Munich 260 icons, frescoes, mosaics and manuscripts from the Turkish-occupied Cyprus. In 2013, after 16 years of litigation 173 ecclesiastical treasures from fifty looted churches in the Turkish-occupied part of Cyprus were repatriated. Among those were four fragments of the 6th century Kanakaria Mosaic: a medallion depicting St. Thomas, the hand of the Virgin, the right hand of the Archangel and a fragment of the decorative band.

By In Cyprus
Previous article
Dust, rain and heat during the week
Next article
APOEL beat Apollon and gains important advantage for the title