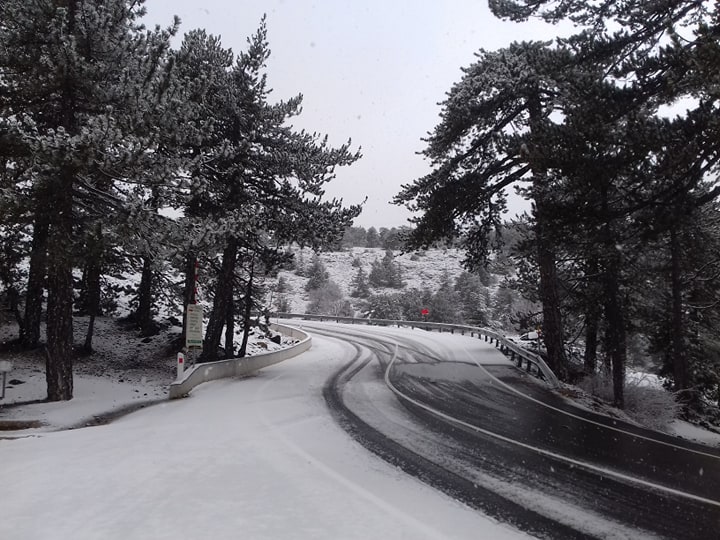 More rain and isolated thunderstorms are forecast for today, with snowfall expected at intervals in the mountains, the Met Office said in its early morning weather bulletin while police urged drivers to be particularly careful because of problems on a number of roads in the mountains and in towns.

A low pressure system will continue to affect the area until Thursday. Wednesday will be mainly cloudy with local rain and isolated thunderstorms and snowfall in the higher mountains. Temperatures will be 14 C inland, around 16 C on the coasts and 2 C in the higher mountains where locally there will be frost.

Tonight will be partly cloudy with scattered showers and isolated thunderstorms. There will be snow or sleet in the mountains. Temperatures will fall to 5 C inland, 7 C on the west coast, around 9 C on the remaining coasts and -1 in the mountains where they will be frost locally.

Thursday will be partly cloudy with isolated showers and/or thunderstorms, mainly in the mountains where there may be snow or sleet. Temperatures will remain at the same levels which are a little below the seasonal average.

Friday will start off partly cloudy and there may be isolated rain or sleet in the mountains. But gradually, the weather will become mainly fine. Temperatures will remain at the same levels.

Saturday will be mainly fine with increased cloud at intervals and temperatures are expected to edge up.

The depth of snow at Troodos Square at the time of issue of the bulletin is 82 cm.

Police have appealed to drivers to be particularly careful  because of various problems on the roads as a result of  wintry conditions. Problems have been reported both in the towns and in the mountain areas, and many roads remain closed. Moreover, roads are slippery and there may be an accumulation of water on the surface.

The Palechori-Agros and the Lagoudera-Chandria roads are open only to vehicles with four wheel drive or which are equipped with snow chains.

Phinopoulos street in Deftera and the road by the military cemetery in Anthoupolis (Lakatamia) are closed because of flooding.

In the Morphou are there are rock slides on the  Orkontas -Kambos, Kato Pyrgos -Kambos and Stavros tis Psokas-Kambos roads.

Police have announced that the two bridges (behind Strovolos Municipality and behind the Presidential Palace) which had closed because of flooding of the Pedieos river yesterday have reopened to traffic.

The following roads are closed:

Road from Milikouri to Ayios Nicolaos

All roads to Troodos are closed.

The Kakopetria-Pinewood and Prodromos-Lemythou roads are open only to four wheel drive vehicles or those equipped with snow chains. The Amiantos-Karvounas road is particularly slippery because of ice.

There have been rock slides on the Dimos-Kyperounda and Agros Ioannis road and one lane is closed at various segments.

The road from the Polis Chrysochous Hospital to the camping site has closed because of overflowing of the Evretou dam.

No serious problems have been reported in the Larnaca and Famagusta districts but there may be accumulation of water on the road surface.

The road conditions are changing and the public should consult the police website and app for updates.