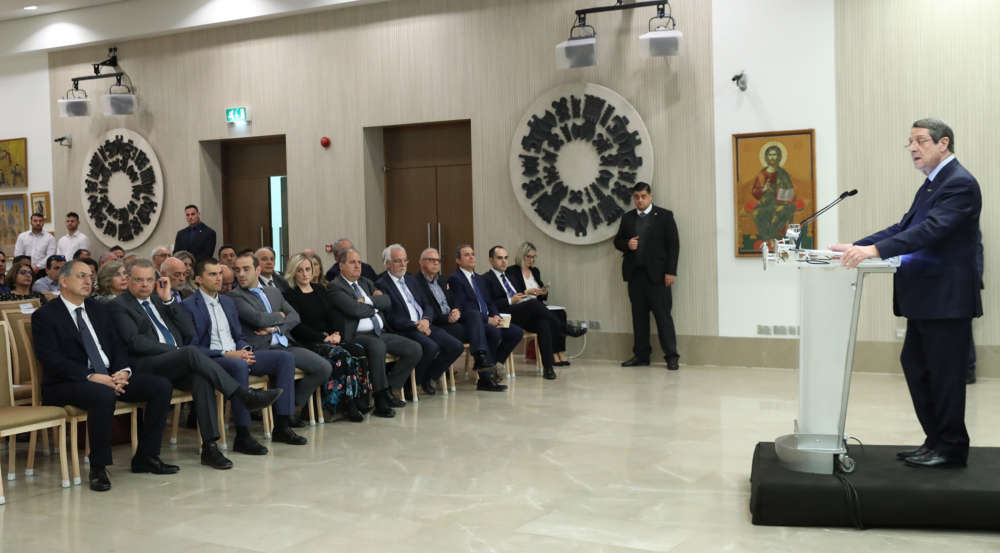 The Minister of Agriculture Costas Kadis presented today at the Presidential Palace the progress of the Sustainable Development Plan for the Akamas National Park in the presence of President Anastasiades, assuring that the park will be operational before the end of 2022.

“Our sustainable development plan together with the Ministry of Interior’s parallel plan for the Akamas communities will solve the most important problems faced by the local communities as well as Cypriot society as a whole,” Kadis said, adding that the project — to be delivered in 2022 — will upgrade visitors’ experience of the area, boost domestic tourism, and rejuvenate the local communities via its contribution to the economy.

Kadis presented the progress of the plan from the day of its approval by the Council of Ministers on October 1, 2018 until today.

He first referred to the establishment and operation of three committees; the Park Management Advisory Committee, the Extended Management Committee and the Implementation Team.

The seven points of entry to the National Park were also agreed, as well as the services to be provided by the 14 service points in the park and the required improvements to the road network.

Meanwhile, stakeholders agreed on the opening hours of the park and its overall operation, the staffing, the regulation of safari and four-wheel drive vehicles, the Blue Lagoon security measures, the legal status of the road network, and nature conservation measures.

Subsequently, an architectural competition was held, which focused on the infrastructure to be created within the park won by architects Stephanie Miseri and Michalis Anastasiou.

Kadis also said that the following three studies were carried out during this time:

– Road Network Improvement Study, which aims to improve the road network in a way that has a positive impact on the environment

– A visitation study designed to assess how many people visit Akamas, their main characteristics and preferences

Finally, Kadis noted that in 2019 it was decided to abolish interventions. In particular, a list of all illegal interventions in the Akamas National Park was prepared, examined, and now their removal is in progress.

Kadis said that detailed architectural plans will begin within the next month as per the schedule. Issues to be resolved by the end of the year include the entrance fee, the park’s operating rules, structural plans for the infrastructure, and more.

The development of infrastructure at junctions will begin in early 2021 and halfway through that year road network improvements will start, he added, and it is estimated that in the first half of 2022 staffing and delivery of equipment will also be complete.

“The park will be fully operational in the last quarter of 2022,” he concluded.

The official visitation figures of Akamas were also presented today by the Executive Chairman of RAI Consultancy that conducted the study, Olympios Toumazou.

Toumazou said that the main goals of the survey were to determine the number of visitors to the Akamas National Park and their profile, the frequency of visits to the Park and the activities of visitors in the park, as well as the level of their satisfaction with the experience.

605 interviews were conducted with permanent residents of the island, men and women, aged 16-65 years. The survey was conducted in the period November – December 2019.

Some of the findings of the survey, as presented today by Toumazou, are:

– 38% of visitors asked what they would like to see more of in the Akamas National Park responded that “they do not want to see anything more and to keep Akamas as is”, that is, natural and authentic. He also mentioned cleanliness, improvement of the road network, and more protection for the area.

– A very high percentage (92%) considers the protection of the Akamas National Park area very important. This percentage is slightly lower in the provinces of Paphos and Famagusta at around 80%.

– About half say they are very happy with their visits to the Akamas National Park. One in four said they are quite satisfied, while one in ten is slightly satisfied.

-Some also reported uncontrolled access to the park, lack of policing, sewage disposal, large numbers of visitors, lack of information on operating rules and poaching.

– Half of Cypriots visited the Akamas National Park only once in 2019, but many appear to have visited it 2-3 times, while others (mainly in Paphos province) visited it more than once.

-The main reasons Cypriots visit the Akamas National Park are for hiking, tourism, to observe nature or to swim. Other reasons include climbing, camping and hunting.

– Almost all Cypriots (90%) use a car to visit the Akamas National Park.

Anastasiades gave a speech during today’s presentation expressing his satisfaction at the revelations of the RAI survey, especially the visitor numbers that were recorded at 1 million annually.

“That number alone reveals the imminent need for the management of the area to protect the Akamas natural habitat, but also presents an opportunity to reap multiple benefits from the park’s rational management and operation,” he stated, also expressing his satisfaction at the progress of implementation of the Sustainable Development Plan presented by Kadis and congratulated everyone involved.

Anastasiades also shared a video on Twitter to mark the Akamas plan’s progress presentation, that shows the timeline of the project: