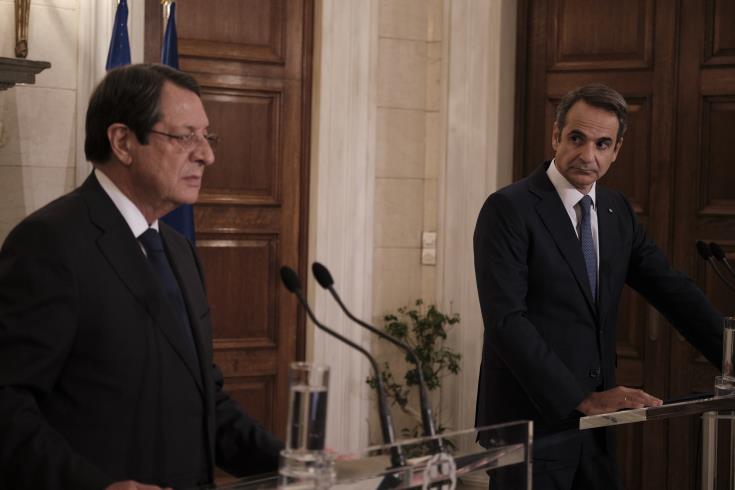 Cyprus and Greece believe that the European Council conclusions on Turkey should be in accord with EU High Representative, Josep Borrell`s report.

In a meeting in Athens on Wednesday, Prime Minister Kyriakos Mitsotakis welcomed President of the Republic of Cyprus Nicos Anastasiades who is in the Greek capital for the celebrations of Greece`s bicentennial of the Greek Revolution (1821).

“It is a great honour to be here for the 200 years since 1821, a struggle which Cyprus participated and also draws inspiration from”, said Anastasiades, adding the two discussed the upcoming European Council and preparations for the 5 + 1 conference on the Cyprus issue in April.

“We want to secure the success of the conference so that we will be able to proceed with talks on Cyprus that will aim to resolve the issue and will not deviate from UN resolutions”, the President remarked, adding the aim is a functional and viable state based on EU principles.

He also underlined that during his meeting with Mitsotakis both agreed on a common line on handling the issues on the European Council agenda. “The communique should be in line with the Borrell report. I want to believe that a consensus will be achieved which will make Ankara think that if it wants to be in line with the EU, it should be able to accept Europe’s preconditions and principles for peace in the Mediterranean”, Anastasiades added.

On his part, Mitsotakis said they discussed preparations in view of the conference and underlined that both leaders insist on the need for the EU to participate.

“We also agreed that at tomorrow`s Summit we must insist on a dual approach on Turkey. We welcomed the content of the Borrell Report and stressed the need for the Conclusions to move in this direction “, the PM added.

Turkey’s provocations against Cyprus undermine its European prospects as well as the Cyprus negotiations. “A proof of this, is its refusal to conform with the Varosha resolutions”, the Greek Premier stressed. It is up to Turkey to continue de-escalation in the Eastern Mediterranean and to prove that it is not a trick. Otherwise, there will be sanctions, the Greek PM said adding the aim is to resume negotiations on Cyprus on the basis of a bizonal, bicommunal federation and UN Security Council resolutions.

Demands for a two-state solution are outside the EU and UN framework and are rejected, he stressed. The common position is an abolition of guarantees, the withdrawal of occupation troops from the island. We want a good relation with our neighbours. Greece is sincere but not naïve” the Greek Premier concluded.

By gavriella
Previous article
Roads to Troodos open only to 4WD and vehicles with snow chains
Next article
Where to get a rapid test on Thursday, 25 March