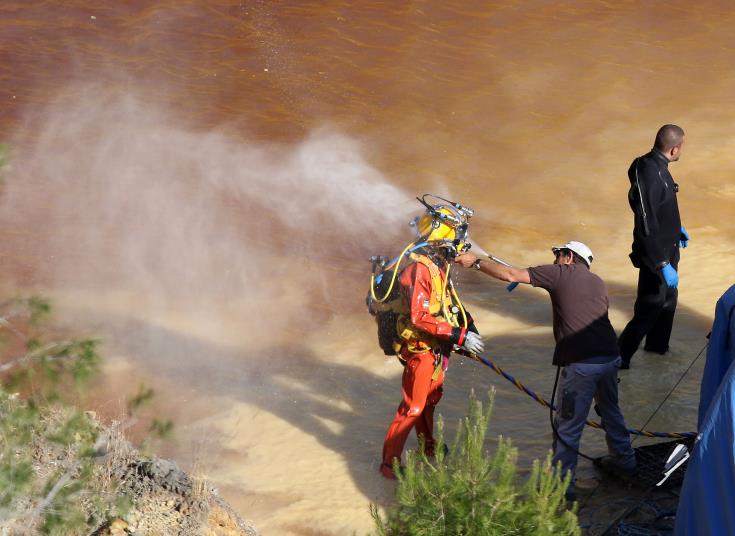 Divers were continuing to search for a murder victim at Kokkini Limni at Mitsero on Tuesday, a month after the discovery of a body in an abandoned mine shaft led to the arrest of a self-confessed  serial killer who has told police he killed five women and two children.

Five bodies have been recovered so far from three locations, but authorities are continuing to look for two victims – of 30 year Maricar Valdez Arquiola at Kokkini Limni and of six year old Sierra at Memi lake in Xyliatou.

Sonar equipment brought in specially from the US is now being sent back, having scanned both lakes. Authorities are also using robotic cameras and divers with special diving equipment.

Efforts have been hampered by low visibility and mud. The Cyprus News Agency reported that problems have arisen with the robotic camera and the search at Kokkini Limni is currently being carried out by a diver aiming to take advantage of the relatively good visibility of one metre. CNA said that sections of the lake have already been searched with no result and that the focus now is on the sides of the lake.

Earlier today, fire chief Markos Trangolas told Radio Active that the search at Kokkini Limni – where divers have found the bodies of a woman and her eight year old daughter and are looking for a third victim – are continuing with the same intensity.

“In the past few days the divers have been searching areas that have been demarcated with ropes, creating corridors in important areas to be checked so that we can rule out some areas,” he said.

In this way, the search teams have now ruled out the east side of the lake where the two first suitcases with the bodies of a mother and daughter were found.

Trangolas said that authorities have also spoken to a UK expert about the possibility of using a radar. He said that because of the quality of the water and the morphology of the lake, it appeared that use of the radar would not bring the desired results. “We have also sent information about the Memi lake and are waiting for a reply,” he said.

“There is a crater there and draining the water will only lead to water filling it from the crater and the crater walls. No-one can tell how much water this will be,” he said.

Even if it was possible to empty the lakes and move the water, this would only pollute the new location where it will be taken, he said. And even if the water is removed, the problem still remained with the huge amount of mud.

That is why authorities are relying on modern equipment and sending in divers to check any findings, he concluded.