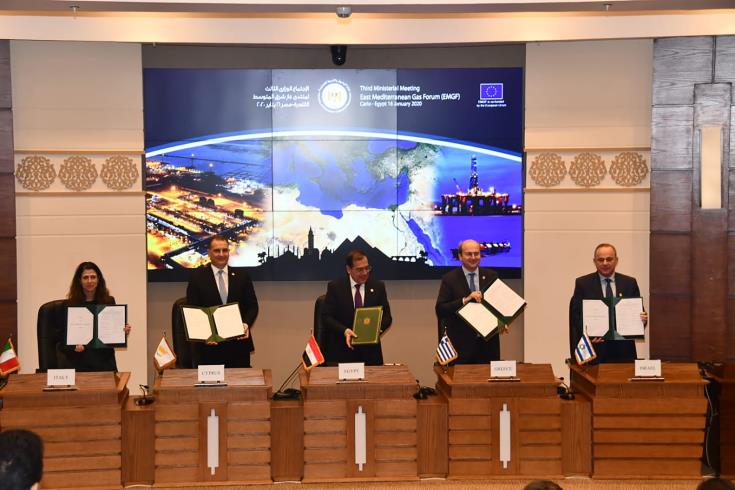 Egyptian Petroleum Minister Tarek El Molla has hailed the signing of the East Med Gas Forum (EMGF) foundation charter in Cairo by Egypt, Cyprus, Greece, Israel, Italy, Jordan and Palestine as an “historic moment” for the cooperation of the  people opf the Mediterranean.

On his part, Cyprus Energy Minister Yiorgos Lakkotrypis said that it constitutes an example of how various countries, even in difficult circumstances, can form alliances for the benefit of the peoples of the region.

They were speaking during a press conference, following the 3rd ministerial summit of the East Med Gas Forum and the signature of the Forum’s charter.

The signing of the charter, according to El Molla constitutes “a cornerstone in our region’s history which will lead us to cooperate for the benefit our our peoples.”

Lakkotrypis said that the East Med Gas Forum charter’s signature is an example as to how various countries, even in difficult circumstances, can form alliances for the benefit of the peoples in the region.

He referred to the progress made on an intended pipeline which will connect Cyprus with Egypt, as one more example on how cooperation between countries can contrbute to the benefit of the peoples in the region.

He noted that all countries participating in the EMGF agreed that natural gas can be used as a tool for peace and not the creation of conflict. Hadjidakis further pointed out the importance of all decisions to be based on international law, which all countries in the region should accept.

El Molla also said that the EMGF establishment process has respected EU acquis and legislation. He further expressed his great satisfaction both about France`s application to take part in the forum and US strong support.

Through this large programme the countries will be able to ensure cheaper natural gas transport which will in turn mean that it will be cheaper for consumers.

Israeli Energy Minister Yuval Steinitz also said on his part that EMGF constitutes an example of coooperation for the benefit of the region.

The next ministerial summit will take place in the second half of 2020.