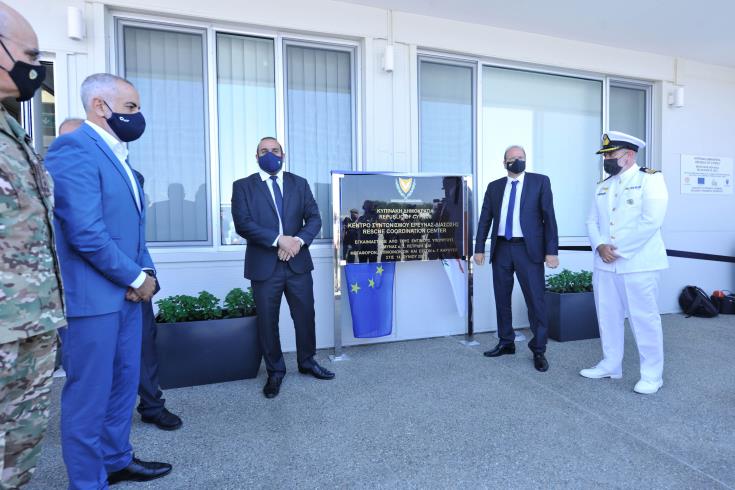 Minister of Defence, Charalambos Petrides described  on Monday the role of the Joint Rescue Coordination Center (JRCC) as crucial, noting that it is one of the most modern Centers in Europe.

The Minister of Defence and Minister of Transport, Communications and Works, Yiannis Karousos, attended on Monday the inauguration ceremony of the new facilities of the JRCC in Larnaka.

In his address, Petrides noted that in recent years, the Republic of Cyprus has attributed great importance in the development of a reliable and capable Search and Rescue System, being fully aware of its obligations arising from the Conventions and Regulations of the International Maritime Organisation (IMO) and the International Civil Aviation Organisation (ICAO), as well as from the exploitation of the resources within its Exclusive Economic Zone.

Today, he stressed, we can be proud for having one of the most modern Centers in Europe, adding that for the ICAO the Center is considered as a model for countries that want to organise their own Search and Rescue System.

The development of the capabilities of the JRCC, with the ultimate goal to meet in the best possible way the international requirements, gave it a particularly crucial role at national level, the Minister pointed out.

He said that Cyprus, being at the eastern most of the European Union, has the potential to play an essential role as a pillar of security and stability in the region.

There is no doubt, he concluded, that one of the main mechanisms in this direction is Cyprus` Search and Rescue System.

Meanwhile, in his address, Minister of Transport Yiannis Karousos said that the Ministry  is responsible for the legal and international obligations of the Republic of Cyprus for Search and Rescue, as well as for the technical and financial support of the Center.

He added that the funding from European Funds which are managed by the Ministry of Interior for the  expansion of the facilities of the ZENON Coordination Center was deemed as necessary for the improvement of the operational capacity of the Center.

We are confident, he said, that the relocation of the Center constitutes an important step forward in our country`s effort to strengthen the state mechanism for coordination and management of humanitarian operations, both within the Nicosia FIR and in the Eastern Mediterranean in general.

JRCC Lieutenant Commander Andreas Charalambides said that the Center has the responsibility to coordinate air and sea accidents that may occur in the area and that the operations room is designed in such a manner that  reduces the reaction time which is especially important in search and rescue operations. Information, he said, can be received ia from satellites or radio and the shift has the ability to coordinate the incident to provide assistance to anyone at risk.