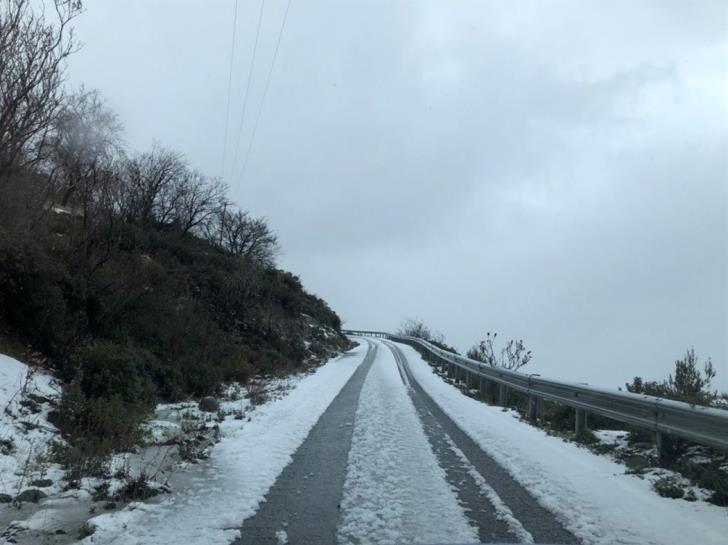 Heavy rains, snow and strong winds are forecast for today as a low pressure system affects the area prompting Paphos Municipality to move today’s scheduled blessing of the waters ceremony from the port to Ayios Anagyros church and local authorities elsewhere to announce that crews are standing by to assist residents in the event of problems.

The Met Office has issued two yellow alerts — the first warning of near gale to gale winds and the second warning of heavy rain and thunderstorms.

Roads in the Troodos mountains are currently open only to vehicles with four wheel drive or which are equipped with snow chains but police have warned that the situation is constantly changing and drivers are advised to consult the police apps and website. Police have also urged drivers to be particularly careful as roads are slippery because of the rains.

In a heavy rainfall warning in force from 10 am to 12 noon tomorrow the Met Office said that rain and isolated thunderstorms are expected initially in the west and south. From  noon on phenomena will be more intense. Locally, mainly over the western and northern and mountainous areas the total rain accumulation is to likely to exceed 50 millimetres in a six hour period and in a thunderstorm the precipitation rate may exceed 35 millimetres per hour

The Met Office has also warned to near gale to gale southerly to southwesterly winds with mean speed of 7 to 8 Beaufort, mainly in the west and south. The warning is in effect from 8 am to 9 pm.

In its early morning weather forecast, the Met Office said that Monday will be mainly cloudy with rain and local thunderstorms and snow in the higher mountains. Locally, and mainly from midday on, the phenomena will be protracted and intense.

Temperatures will rise to 16 C inland and on the coast and 6 C in the mountains.

On Tuesday there will be local rain and isolated thunderstorms while on Wednesday the weather will be cloudy at intervals with local rain and isolated thunderstorms, mainly inland, the north and east as well as snow in the higher mountain peaks. The weather will gradually improve and on Thursday there will be increased cloud at intervals with the possibility of scattered showers.

Temperatures will edge down gradually until Wednesday and rise on Thursday to a little below the seasonal average.

The depth of snow on Troodos Square early on Monday morning was 50 cm.