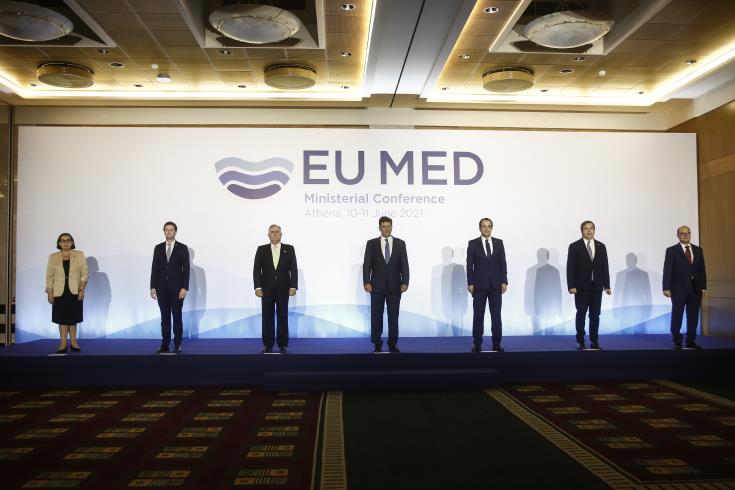 European Affairs Ministers who participated in the Ministerial Summit of the Southern European (MED7) countries, held on Friday in Athens, express in a joint statement their grave concern regarding violations in Varosha and recall the importance of the status of Varosha as set out in United Nations Security Council resolutions.

“We stress the importance of implementing these resolutions and call for the immediate reversal of all violations”, the joint statement says.

The seven Foreign Ministers also reiterate their “strong commitment to a viable comprehensive settlement of the Cyprus issue on the basis of a bicommunal, bizonal federation with political equality, as set out in the relevant UNSC Resolutions, which are binding for all, and in line with the EU acquis, values and principles”.

“Efforts to resume negotiations should not be further undermined by illegal and provocative behavior in the Maritime Zones and on the territory of Cyprus. In case of such actions we reaffirm the determination of the European Union to use the instruments and options at its disposal to defend its interests and those of its Member States as well as to uphold regional stability”, the statement stresses.

As regards the informal five-party meeting, held in Geneva on 27-29 April, the seven Ministers deplore the position expressed in the meeting for a “two state solution” and underline that “it remains crucial that Turkey commits to the agreed basis in line with UN Resolutions, in particular Resolution 1251”.

Recalling the European Union’s strategic interest in a stable and secure environment in the Eastern Mediterranean, the Minsters of MED 7 affirmed that they share a joint vision with regard to these challenges and to the region’s future.

“We wish to extend our cooperation to all neighbouring countries. We call on all countries in the region to respect the sovereignty and sovereign rights of all EU Member States, as well as international law, including the law of the sea. As set out in relevant European Council Conclusions, as well as the Statement of the Members of the European Council of 25th March 2021, it is fundamental that Turkey unequivocally abides by the above stated principles as well as that of good neighbourly relations and that it permanently abstains from renewed provocations or unilateral actions in breach of international law”, they stress.

“We underline that the delimitation of the Continental Shelf and the Exclusive Economic Zone should be addressed through dialogue and negotiation in good faith, in full respect of international law, including UNCLOS. We call on Turkey to accept the invitation by Cyprus to engage in dialogue on the delimitation of the maritime zones between their relevant coasts, including by submitting the issue to the International Court of Justice”, the joint statement says.

France’s Minister of State for European Affairs, Clément Beaune, addressing earlier on Friday a press conference in Athens expressed his country’s support to Greece and Cyprus vis-à-vis existing regional challenges. He said that when it comes to the issues of the Eastern Mediterranean “we are always ready to discuss with Turkey, in a spirit, however, of solidarity and determination, as we proved since last year in the various discussions we had.”

Beaune also said that French support for Greece and Cyprus vis-à-vis regional challenges is not merely a sign of solidarity for two EU member states, but support for Europe’s strength over these matters. We are determined and very clear on issues pertaining to the sovereignty of our states, he concluded.

UN Security Council resolution 550 (1984) considers any attempts to settle any part of Varosha by people other than its inhabitants as inadmissible and calls for the transfer of this area to the administration of the UN. UN Security Council resolution 789 (1992) also urges that with a view to the implementation of resolution 550 (1984), the area at present under the control of the United Nations Peace-keeping Force in Cyprus be extended to include Varosha. On October 8, 2020, the Turkish side opened part of the fenced area of Varosha, following an announcement made in Ankara on October 6. Both the UN Secretary-General and the EU expressed concern, while the UN Security Council called for the reversal of this course of action.