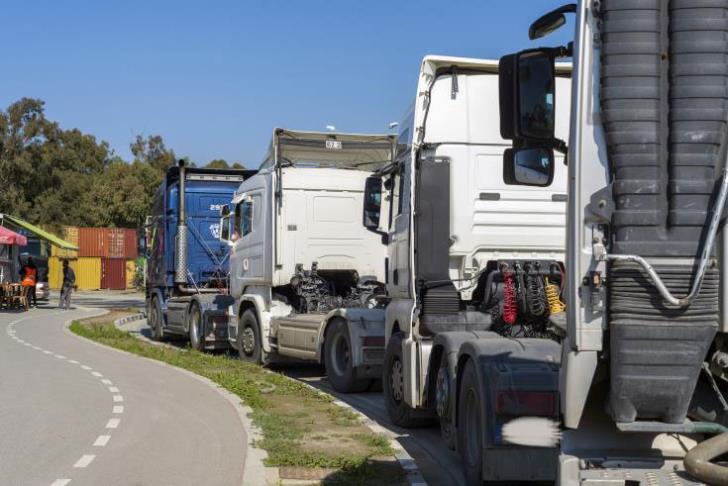 Trailer truck drivers that transfer containers to and from Limassol port went on a warning strike on Thursday arguing that the port’s operators cause delays in servicing them.

The strikers gathered outside the entrance of the container terminal on Thursday morning.
They argue that servicing times are too long, which makes their work difficult as they have tachographs installed on their vehicles.
Tachographs are devices which record drivers’ activity, including how fast they work.
“Unfortunately there was no response from the two managing companies Eurogate and DP World Limassol, to our request for servicing times to be shortened,” secretary of the Confederation of Professional Craftsmen and Shopkeepers (POVEK) Kyriacos Moustakas said.
The Confederation also briefed the general director of the Transport Ministry on the issue with no result, thus the “frustration of the drivers left them with no choice” but to strike, Moustakas explained.
The drivers will meet to discuss their next steps, he added and did not rule out the possibility of taking other measures such as cutting off access to the port or organising with other drivers who face issues in their jobs.
“The drivers have come to this point because a succession of problems affect them, such as the issue of inspections and the new law which stipulates that professional drivers have to pay traffic fines, ten times higher than non-professional drivers,” he said.
The strike left to hundreds of containers stranded at Limassol port to the dismay of the business community.
By In Cyprus
Previous article
Salamis launches commercial shipping link between Thessaloniki, Limassol and Haifa
Next article
Inflation at 1.4% in March