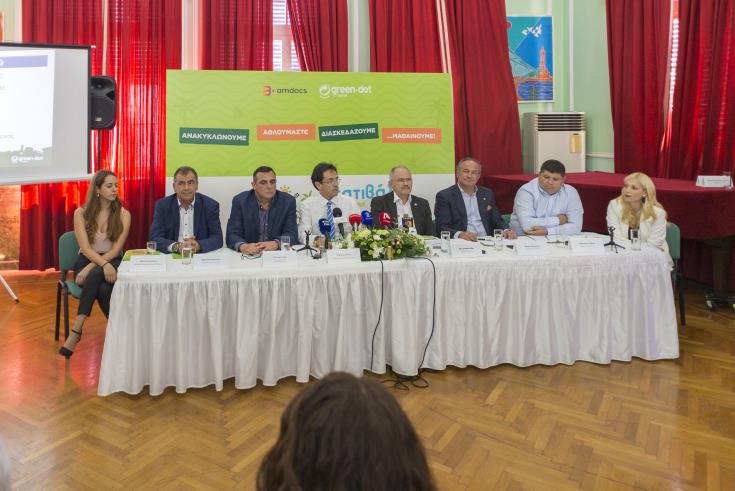 Under the slogan “Build good habits” and aiming to raise public awareness, the 5th Limassol Environment and Recycling Festival will take place on Saturday.

The festival is organised by Green Dot Cyprus and the main Limassol municipalities. At a press conference on Thursday, Mayors  expressed support for the festival and efforts to increase recycling in Limassol, which now ranges between 12% and 15%.

Limassol mayor Nicos Nicolaides spoke of the challenges local societies are faced with in the effort to properly manage waste, noting that “until recently we all talked about recycling matters but took little action without much cost, because we had a ‘black hole’ in Vati, where we got rid of our sins.

“The Vati landfill now belongs to the past and we have a huge challenge to meet, in order to properly manage waste since we are producing a much greater percentage of waste compared to other European countries and it is our duty to correct this digression by reducing waste production, recycling and reusing.”

At the same time, Nicolaides expressed the view that once the Vati landfill was closed down “society showed its worst image,” since certain people still prefer to dump bulky and large waste in open spaces, adding that many actions are necessary such as the Environment and Recycling Festival, to convey messages which change attitudes.

In addition, he said that in order to achieve an increase of the percentage of recycling and reduction of waste on the one hand citizens should manage their waste the right way and on the other hand the relevant bodies should offer the necessary means and programmes for them to do so, such as Green Points.

“It is a great challenge and it is one which concerns everyone,” he noted, adding that “we have no option anymore but to decisively deal with it because the problem will only become greater.”

Mayors of Ayios Athanasios Marinos Kyriakou, Mesa Gitonia Doros Antoniou and Germasogia Kyriakos Xydias also spoke of the need for more recycling and reduction of waste produced by households in their statements.

Green Dot President Michalis Spanos said, on his part, that the logic behind strategic alliances, mainly with local authorities, focuses on the direct contact with citizens which has to do with encouraging their participation in reaching common strategic goals through common actions, such as the Environment and Recycling Festival.

Spanos added that Green Dot’s relations with local authorities should be reviewed so that they cover a wider range of areas “particularly now that their direct economic relationship has ceased due to new legislation and regulations which have been voted.”

The festival takes place on Saturday, at the Coastal Multifunctional Park of Epichosis, from 10.00 hours to 21.00 hours and visitors will have the opportunity to have fun with educational games and activities, take part in workshops about reusing and recycling and be briefed about the work and activities of organisations which are active in environmental matters.

During the festival there will be music and dancing acts providing entertainment while food and drink will be on offer at affordable prices.

There will be no use of single use plastics, while recycling bins for PMD and paper will be located in the festival area.