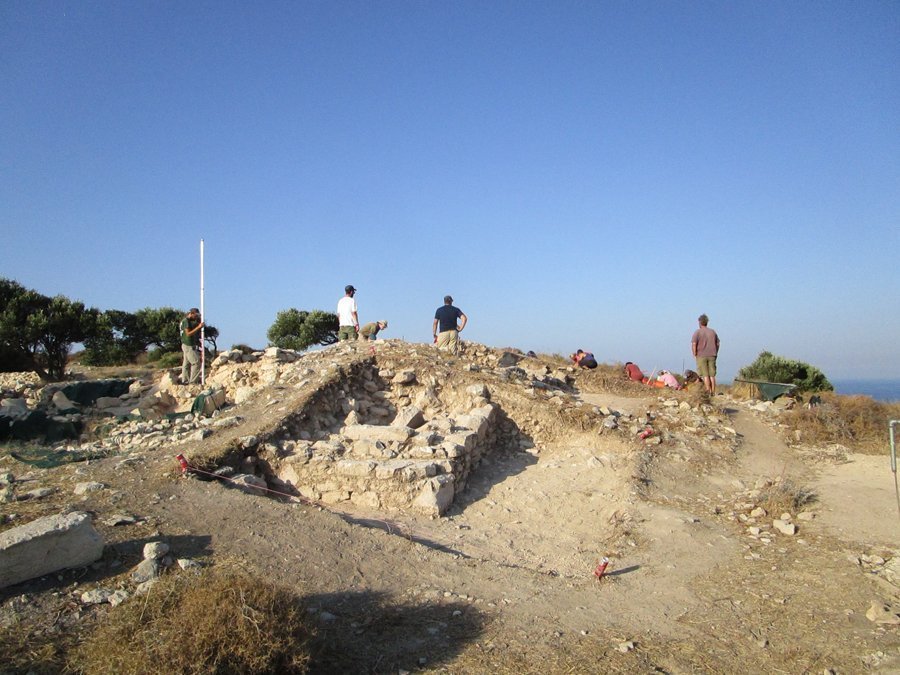 Archaeologists of the Kourion Urban Space Project (KUSP) excavating the remains of a large building at Curium  have learnt more about the people that used it during this season’s excavations.

Known as Building 4, the building is believed to date back to before the end of the 4th century and is situated west of Earthquake House at Curium’s Acropolis.

The team is working under the direction of Dr Thomas W. Davis of the Tandy Institute for Archaeology at the Southwestern Baptist Theological Seminary in Fort Worth Texas, USA.  Davis was formerly the Director of the Cyprus American Archaeological Research Institute in Nicosia from 2003-2011.

Excavations there have been ongoing since 2013.

The excavation has so far exposed what is believed to be the east and west exterior walls of the structure, and several walls that divide the building internally.  The team has isolated at least four different internal rooms, a possible covered courtyard, and an outside space that includes access to cisterns that once held water.

The 2018 excavation season has revealed that Building 4 had a unique-use life.

The structure was built, extended and internally divided, destroyed, robbed, and buried by human and natural forces over time.

Continuing its life, Building 4 finally re-emerged in the archaeological record piece by piece in the last five years.

Due to the fact that some walls of the building are constructed from large limestone blocks and others are composed of smaller field stones, it appears that this building underwent alterations and additions during its use.

Like its neighbour, the Earthquake House, Building 4 appears to have been catastrophically destroyed, perhaps in the series of earthquakes that laid waste to much of Curium in the last half of the 4th century; walls composed of small field stones collapsed, large blocks were shaken off walls and broken, and some walls were pushed out of alignment giving them an S-shaped appearance.

In what might be a roofed courtyard, large stones, some carved with acanthus leaf patterns and other designs, were toppled from the surrounding walls.

This action collapsed the roof and left a layer of roof tiles on top of what remained of the once standing surrounding walls.

Following the catastrophic event, Building 4 appears to have been abandoned.  Wind-blown sand from the beach below began filling in the spaces between the collapsed wall stones, burying the building.  This did not end the life of Building 4, however. It appears that once the building was destroyed, people still living on the Kourion acropolis dumped their refuse on the decaying building.  This created a thick ribbon of discarded, broken pottery on top of the remains of Building 4, which the excavators now arduously try to piece back together to form near-complete pots.

Building 4 continued to decay over time and, at some point in the past large cut-blocks were removed to form parts of walls for use elsewhere. The re-use of stone can be seen in multiple buildings on the Kourion acropolis, as well as elsewhere in Cyprus throughout history.

As the KUSP team excavates Building 4, information is coming to light about the people who used this building.

In several of the rooms of this structure, the inhabitants imported marble and calcite to decorate the floors and the lower portions of the walls.  They adorned the upper portion of the walls with plaster painted with stripes or casual brush strokes of red, turquoise, black and yellow.  The inhabitants also imported other goods, likely at a great expense.

A partly recovered green and yellow mosaic glass plate made in the Kharga Oasis in Egypt was imported and used by the inhabitants of this building.  A storage jar also from Egypt was uncovered in another room and was probably imported for its contents.  During the 2018 season, the excavators have found fragments from imported marble statues representing both human and animal forms.

By In Cyprus
Previous articleRussia to hold biggest war games in nearly four decades
Next articleMay: Britain will use aid budget to boost trade in Africa