Leaders of Cyprus, Greece and Egypt pledge to deepen their cooperation 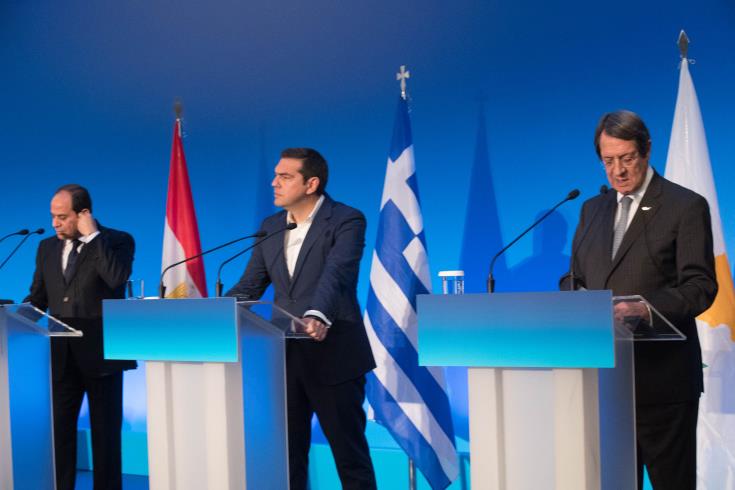 Leaders of Cyprus, Greece and Egypt on Wednesday reiterated their determination to intensify their trilateral dialogue, with a view to achieve deeper cooperation in all fields.

During their summit meeting in Elounda, Crete, Cyprus President Nicos Anastasiades also informed the Prime Minister of Greece Alexis Tsipras and the President of Egypt Abdel Fattah el-Sisi on the Cyprus problem.

In statements after the Summit, Anastasiades reiterated his determination to actively engage into a dialogue that will at last bring peace to Cyprus, with the establishment of a state which will be fully compatible with Cyprus` obligations as an EU member-state, and with full respect to the EU acquis and the rules of international law.

On his part, Tsipras expressed Greece`s continuous support to a just and viable settlement of the Cyprus problem and noted that the field of energy was one of the important issues discussed in Elounda.

He also referred to the importance of the delimitation of the EEZ, noting that during his bilateral meeting with Sisi they agreed to find a way to overcome any technical difficulties and to move forward the soonest possible to an agreement on this issue.

On his part, Sisi referred to the need for the continuation of the negotiations on the Cyprus problem, on the basis of the international law.

The three countries also agreed during the Summit to establish a Permanent Secretariat in Cyprus aiming at the better coordination of their trilateral cooperation.

CNA has learned that the three countries agreed during the summit that the issue of energy security affects all countries and they will collectively address any provocations.

Moreover, instructions were given to competent Ministers to proceed with the creation of cooperation mechanisms of new countries, including France.

Furthermore the three countries paved the way for the creation of an Informal Energy Forum, based in Egypt.