Lavender grabs spotlight at festival in Platres on July 6-7 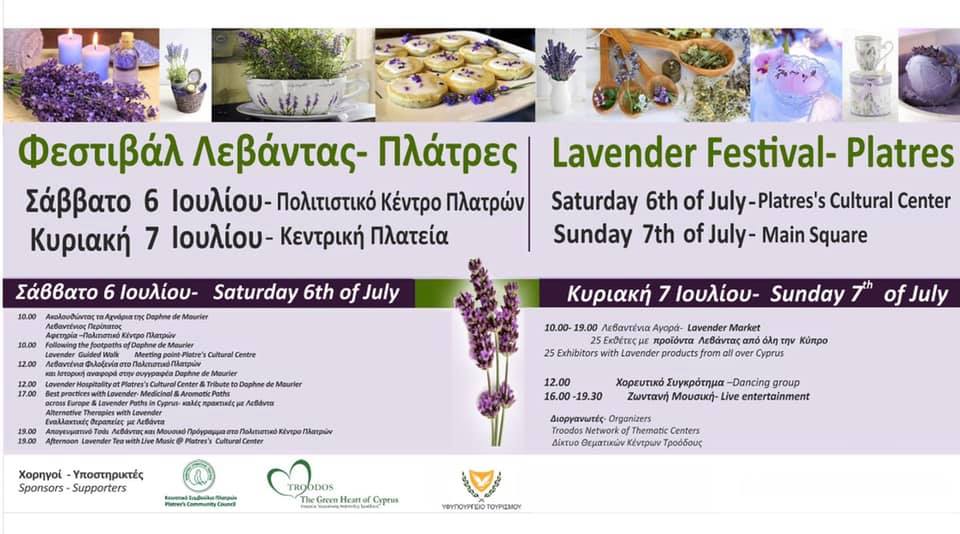 Platres will shine the spotlight on lavender during a two-day festival to be held there on the weekend of July 6-7.

As Yioula Michaelidou Papakyriacou of  the Troodos Regional Board of Tourism writes, lavender use has been documented for over 2500 years. The ancient Egyptians used lavender for mummification and perfume. Romans used lavender oils for cooking, bathing and scenting the air and the name is derived from the Latin verb lavare—which means, “to wash.”

The Romans also used lavender oil in soaps and carried it with them throughout the Roman Empire.

In Mediaeval and Renaissance France, women who took in washing for hire were known as “lavenders.” Clothes were washed in lavender and laid to dry on lavender bushes. Lavender was used to scent drawers, perfume the air and ward off infection and heal wounds. It was also recognised in Roman times for its antiseptic and healing qualities. The Ancient Greeks used lavender to fight insomnia and back aches.

Lavender is referred to in the Bible by the name “spikenard.” In John, Chapter 12, Mary is said to have anointed the feet of Jesus with the very costly “ointment of spikenard” and wiped His feet with her hair.

Lavender was also used as a remedy for the Great Plague in London in the 17th century. Queen Elizabeth of England required lavender conserve at the royal table and fresh lavender flowers throughout her residence. Queen Victoria took an interest in lavender in 19th century England and English lavender became popular. The Victorians used lavender in gardens and both queens used products from the famous lavender company, Yardley’s of London.

Today, lavender is cultivated commercially in France, England, Italy, Australia, New Zealand, the United States and Canada, to name a few. The South of France, in Provence, lavender blooms in late June and fills the countryside markets with the wonderful fragrance. Flower festivals and craft fairs abound with the sweet fragrance of lavender.

In Platres, which has hosted Royals and celebrities from all over the World, lavender found a home at the  community’s cultural centre, where a Lavender Thematic Centre has been set up, so that people have a Lavender sensory experience.

It is believed that lavender was originally  brought to Platres by the English soldiers who had their base there. The local people loved lavender, planted it in their gardens and used the flowers for distillation and  for protecting the clothes from moths. Beautiful bouquets were created so that the lavender flowers, would be preserved.

For the last four years, the community has been trained in the value and healing properties of lavender and a lot of women have started to create products, from lavender concentrate, to lavender chocolates and lavender ice cream.

Lavender is truly a magical plant, full of sweet fragrance and therapeutic in nature. It is very easy to grow, basically requiring full sun and good drainage. Lavender is a very hardy plant and will even tolerate neglect.

Lavender oil is used primarily in perfumes and soaps. But its uses vary from household cleaning products to deodorizers, candles and food products. It is known for its antiseptic and antibiotic properties that can kill bacteria, alleviate the effects of bee stings and migraines, heal burns and ward off moths in clothing closets.

The fragrance of lavender is also used for calming, promoting deeper and longer sleep and balancing emotions. Aromatherapy owes its existence to lavender. Essential oils are used to bring healing and balance to the body.

Indulge yourself in a Lavender Sensory Experience and visit Platres on July 6 or 7.

Saturday will be devoted to lavender walks,  education and workshops with lavender, and on Sunday the 7.,

There will be a Lavender Market at the Main Square with a lot of entertainment.

By In Cyprus
Previous articleTravelling by air? The EU has you covered
Next articlePaphos: Russian tourist’s death due to drowning