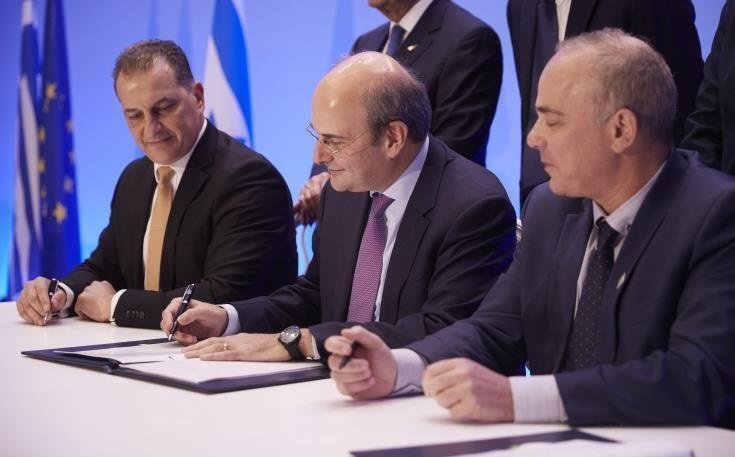 The American-Hellenic Chamber of Commerce organised on Tuesday, June 2, a virtual roundtable discussion, entitled “East Med the trilateral partnership (Greece-Israel-Cyprus) and its role in regional energy security and economic cooperation in the age of Covid-19 and beyond”.

Speaking in the virtual roundtable discussion, Cyprus Minister of Energy, Commerce and Tourism, Georgios Lakkotrypis underlined that Cyprus, Greece and Israel, share common principles, as well as a joint vision for the future. As he said, the Cyprus-Greece-Israel trilateral cooperation instigated further multilateral alliances in the region.

Minister Lakkotrypis expressed the view that the three countries’ determination to find joint solutions reinforces the confidence of the energy companies, which intend to invest in the energy field of the region. As he said, following the approval of the intergovernmental agreement for the construction of the EastMed pipeline by the Greek Council of Ministers, the Cyprus House of Representatives will soon proceed to its approval too.

During the discussion Lakkotrypis underlined that the Republic of Cyprus remains firm in its will for a solution to the Cyprus Problem, calling repeatedly on Turkey to return to the negotiation table. Turkey’s negation to discuss the open issues, as well as its unfounded invocation of the international Law, proves that its accusations about the Greece-Cyprus-Israel trilateral cooperation are also unfounded, Lakkotrypis said.

On his part, Greek Minister of Energy and Environment Kostis Hatzidakis expressed the view that while the Greece-Cyprus-Israel cooperation is focused on the fields of natural gas and electric energy, the three countries could further their cooperation in the environmental and the green agenda issues.

As regards Turkey’s recent moves in the energy field, Hatzidakis stressed that the Greek government remains decisive against Turkish provocativeness, while making clear that the Greece-Cyprus-Israel alliance is not aimed against any country, but rather promotes regional stability and peace.

During his speech, Israeli Minister of National Infrastructures, Energy and Water Resources Yuval Steinitz said that the energy field plays a decisive role in the Greece-Cyprus-Israel trilateral cooperation. He also expressed the view that the EastMed pipeline –while being an ambitious project– represents the best and most secure solution for the transport of natural gas. EastMed constitutes a long-term investment, the construction of which is absolutely viable, Steinitz suggested.

US Assistant Secretary of State for Energy Resources Francis Fannon speaking at the roundtable discussion, stressed the importance of ending all provocative actions that could undermine the investors’ trust and the political stability in the region.

Concerning Turkey’s recent actions in Cyprus’ EEZ and on the possibility of attempting oil explorations in the Greek Continental Shelf, Fannon said that according to the international law all islands have an EEZ and a Continental Shelf.

“We are not commenting on future actions that may happen or not, but we are encouraging states to stop provocative actions, behaviours and statements. Turkey is an important country and we want that it preserves its Western orientation”, Fannon said.