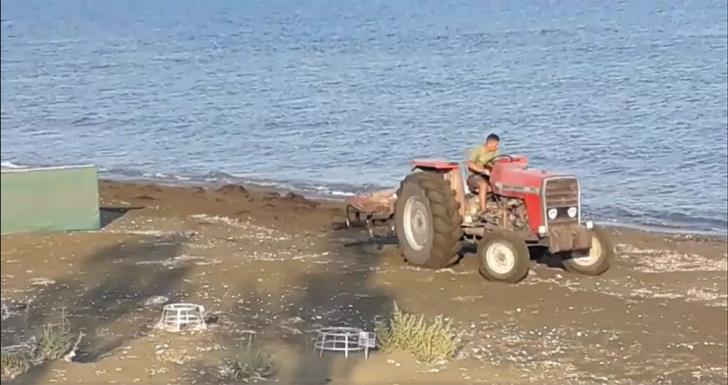 Agriculture Minister Costas Kadis has contacted Larnaca’s district officer to condemn a recent incident of a tractor flattening the area near a turtle nesting beach at Kiti and asking that he take all necessary steps to protect the sea turtles and their nests at the specific beach.

The official announcement on Thursday follows the release of a video on social media showing a tractor  near special protective cages for turtles at the Caretta beach in Kiti where loggerhead turtles nest.

It said that the Fisheries and Marine Research Department had already reported the issue to the district officer.

“In addition the Minister of Agriculture, Rural development and Environment Mr Costas Kadis has personally contacted the district officer of Larnaca Mr Odysseas Hadjistefanou denouncing the incident and asking that all the necessary steps be taken to protect the sea turtles and their nests on the specific beach, in view also of the fact that it is currently the reproductive season for turtles,” the announcement said.

The district office assured the minister that all necessary steps will be taken to protect the beach.

Sea turtles in Cyprus are protected by the fishing law of 1971 and the regulations of 1990. They are also included in annex two of the protocol of specially protected areas and the diversity of the Mediterranean under the Barcelona Convention which Cyprus ratified into law in 2001, the ministry added.

“As a result, even though the beaches in the areas of Pervolia-Softades-Kiti are not part of the protection zone of the  Natura 2000 network for turtles, the turtles and their eggs are protected in this area and throughout the Republic of Cyprus,” the announcement added.

As part of the turtle preservation programme, turtle nests in these areas are recorded and monitored. These beaches are also monitored by drone through the LIFE Euroturtles programme, it concluded.