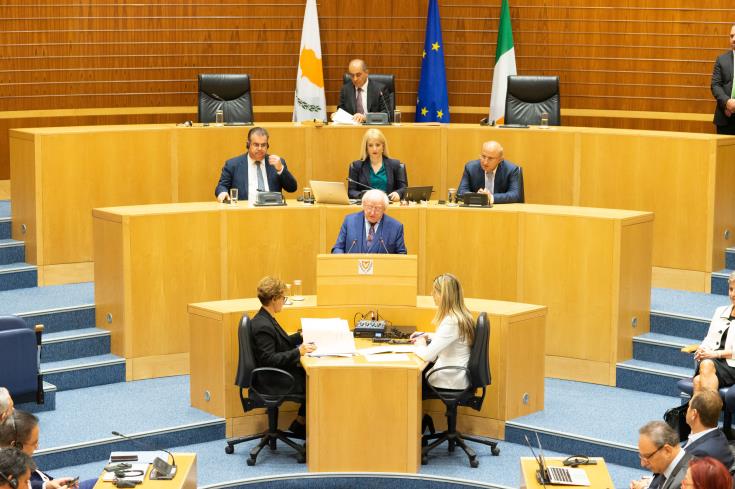 Ireland supports international law regarding issues in the Cyprus’ EEZ, the President of the Republic of Ireland, Michael D. Higgins stated. At the same time, he called on Turkey to seek the negotiating approach in Syria and to stop its military invasion, which is causing a humanitarian crisis.

Higgins was addressing a special plenary session of the House of Representatives, while previously he had a meeting with House President Demetris Syllouris. In his speech, the Irish President sent messages on many humanitarian issues, such as the financial crisis, migration and the environment.

Addressing the plenary, Higgins expressed his deep concern, as the President of Ireland, at what is happening in northern Syria, and the unilateral intervention by Turkey in that area. Today, he said, “allow me to reiterate here my call on Turkey to seek an alternative, negotiated approach, one that rejects military intervention and its resulting humanitarian distress, and one that rejects the coercion or forced returns of refugees”.

He also said that he had discussed with President Anastasiades earlier this week, his concern in relation to the recent arrival of drilling and prospecting off-shore. “Today, I reiterate Ireland’s view that matters of the maritime, and activities at sea, should be undertaken within the framework of international law and any argument on these matters should be settled through negotiations undertaken in that context,” he pointed out.

The Irish President said that these days our two islands find many areas of fruitful cooperation, all of which “I hope will deepen with my visit, from culture and tourism, law and business, food and environment, to our developing relations in the marine and maritime sector”.

He pointed out that Cyprus and Ireland both suffered the impact of the global financial crisis and, in the case of both countries, emergence from those difficult times is largely owing to the resilience of our peoples who endured much hardship. “It is clear now that, as a direct result of the blunt impositions and handling of the crisis, social cohesion has been significantly damaged across our Union”, he added.

He went on to say that Ireland and Cyprus are both committed members of the EU, supporters of a social Europe, stressing that while we may be at the geographical fringes of Europe, we are both now at the heart of the European discourse. “Our respective national experiences afford us a unique perspective on the Union and enable us to make incisive and informed contributions regarding the possible futures of the European Union”, he said, noting at the same time that the two countries share a commitment to the essential values of the European Union, such as the respect for the rule of law, the protection of human rights and also the principle of equality within and between member states.

Syllouris in his address initially said that the presence of the Irish President in Cyprus reflects the friendly ties between Cyprus and Ireland, extending both to the level of leadership as and at the level of the peoples.

Syllouris expressed the gratitude of the political leadership and the people of Cyprus for the firm support of the Government of Ireland in the efforts to reach an agreed, just and viable solution to the Cyprus problem, reaffirming that the Cyprus Republic remains committed to a solution based on the UN resolutions, and the principles of the international and European law, provides for a country without guarantees and foreign troops and with respect for the fundamental human rights of all Cypriots.

The House President stressed that Turkey, instead of cooperating in resolving the Cyprus problem, persists in its unreliable positions and further intensifies its defiant stance by violating international law and violating the Cyprus Exclusive Economic Zone.

EU Foreign Affairs Ministers agreed on Monday in Luxembourg that “a framework regime of restrictive measures targeting natural and legal persons responsible for or involved in the illegal drilling activity of hydrocarbons in the Eastern Mediterranean is put in place” in light of Turkey’s continued illegal drilling activities in the eastern Mediterranean. They invited the EU High Representative and the Commission to swiftly present proposals to this effect.