How did 400 men fight the British Empire? The insurgency tactics of EOKA 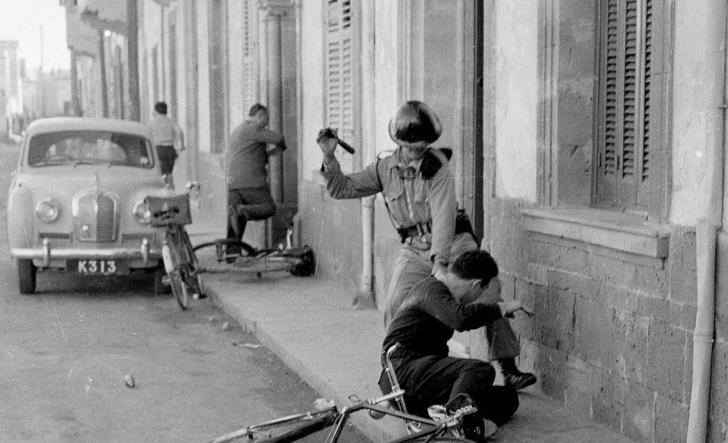 In terms of numbers, the Cyprus Emergency was one of the most uneven anti-colonial struggles in history. How did the 400 men of EOKA manage to address this asymmetry and how do they evaluate the result of their fight?

“It was Monday morning. The leader instructed me to accompany him to the dentist because he would not come to fix his teeth in our hideout. At two, they discovered our dens. The leader had to be informed that he was in danger. If the leader is in danger, the fight is in danger.

“I went down and fought off a policeman. I was shot and they caught me. The Brits ended up going up to the mountains. Hundreds of them. My thinking was, that if they shot at me the shooting would be heard up in the mountains and the leader would be alerted. But because of the fog, they didn’t hear the shootings.

The incident which Renos Kyriakides, a retired headmaster and former member of EOKA (National Organisation of Cypriot Fighters), describes above was the battle of Spilia. It took place on a Cypriot mountain on the 12th of December 1955.

After being given the location of EOKA’s headquarters by an informant, 700 British soldiers shaped in two flanks, attempted to encircle the Greek-Cypriots guerrillas. As they were ascending the mountain, they were spotted.

Georgios Grivas, the leader of the organisation, sent a team headed by his second in-command, Grigoris Afxentiou to fight. In heavy fog, Afxentiou engaged with the colonial troops and then retreated.

The two British flanks thinking that they were still fighting the guerrillas, continued shooting at each other for eight hours. Grivas and his team were long-gone.

The battle of Spilia was the highest friendly-fire incident of the Cyprus Emergency. 127 British soldiers were shot dead and another 102 injured.[2]

Afxentiou’s plan to shoot and run, leaving the British soldiers shooting at each other echoed the whole character of EOKA’s insurgency.

A small number of fighters (numbers ranged from 340 to 450) operating with limited resources, using guerrilla tactics and knowledge of the local landscape, against a significantly larger army (at the height of the crisis, the colonial troops reached 40,000)[3].

EOKA’s fight took place in a time of reappraisal of Britain’s position in the world. After WWII, the empire was shrinking and a new paradigm of British power was in development. One of economic bonds, military alliances and a special relationship with the US.

Cyprus was considered a ‘fortress’ colony and was essential for the security of the Empire in the eastern Mediterranean and Middle East.

A few months before the Emergency, Henry Hopkinson, Minister of State for the Colonies, said “there can be no question of any change of sovereignty in Cyprus. There are certain territories in the Commonwealth which owing to their particular circumstances, can never expect to be fully independent.”[4]

British policymakers, miscalculated the grip of nationalism and enosis (the irredentist idea of unification with Greece) among the Greek-Cypriots, who made up 82% of the population.

Unlike most post-WWII insurgencies, which were led by communists, EOKA was a right-wing nationalist group, which aimed at the politician union of Cyprus with Greece. It was formed in 1953 by Georgios Grivas, a Greek-Cypriot colonel of the Greek army and Archbishop Makarios, the leader of the Greek-Cypriot community (he would later become the first president of Cyprus).

“We got our training and weapons from the Greece, but we took as much as we could from the Brits. We would take their weapons after successful operations. Once, a ship came from Egypt to bring weapons for the Brits. We took them! I had six BRENs (a British light machine gun),” says Kyriakides.

The church, a historical champion of enosis took on the propaganda work and was the source of most of EOKA’s funds.

In a letter to Makarios, Grivas explained his plan. He viewed the campaign as a progression: “At the beginning we shall organize acts of sabotage in the towns and in important communication centers, with simultaneous attacks on police stations in order to compel the enemy to disperse its forces. If this effort is crowned with success, then we shall go on with small groups of armed men which will make sudden attacks and then hide themselves. Finally, we shall organize a general uprising of the youths in the towns and the country with militant demonstrations.”[6]

EOKA’s tactics allowed the guerillas to inflict casualties on British forces while exposing themselves to little danger.

“Open conflict was not an option. We were few and had no ammunition. For this reason, our leader chose the path of the ‘illegal fight’. Our tactic was to attack intensely, speedily and to flee quickly. That’s why we mostly acted at night,” says Kyriakides.

Attacks on security personnel were carried out in cities. After the attack, the gunman was able to melt back into the populace, using the disorder that followed the attack as cover.

“Attacking a Brit in a city? You are exposed. You can’t run very far. We would have women hand the gun to a fighter. He would kill the Brit and she would run off in a taxi. This happened all the time. Once, the fighter pretended to be a journalist seeking information,” Kyriakides says.

According to Kyriakides, EOKA was divided into 17 branches. “The city branch leader would organize the guerilla team and the student protests. There were a lot of people working for the village branches as well. We recruited around five people from each village. I was responsible for 43 villages. My team had 20-25 men. In addition, each village had its own team.

“The branches wouldn’t communicate with each other. We only reported to the leader. Our leader would write from the mountains and the mail would be carried by the villagers of Kyperounta by car. It was usually two villagers, a father with his son.”

EOKA also targeted Turkish and Greek-Cypriots, which they regarded as traitors. Additionally, they carried out the assassination and beating of communists to intimate them away from peace.

British country insurgency theorists, argue that insurgencies are a civil-police problem. In Cyprus, Britain had a problem implementing this doctrine as police officers were regularly infiltrated and intimated by EOKA and distrusted by the public.[7]

By late 1956, EOKA had killed 17 members of the security forces and 21 Cypriots. 100 British military personnel were wounded. Against this, security forces had killed only eight EOKA fighters. The statistics reflected the ability of EOKA to inflict damage without significant loss to itself.

Like other guerrilla leaders, Grivas was aware of the vital connection between insurgents and the local population. “A guerrilla war, stands no chance of success, whatever the qualities of their leader, unless they have the complete support of the majority of the country’s inhabitants, for it is to them that the movement will turn for assistance of every kind.”[8]

Passive resistance included the taking down of British flags outside public buildings to strikes and demonstrations. It had the potential to involve members of the population not normally involved in insurgency operations such as women and students.

These activities aimed to confuse the British forces and make it manifest abroad that they were not in control of the situation.

Acknowledging the material limitations of EOKA, Grivas argued: ‘It should not be supposed that by these means we should expect to impose a total material defeat on the British forces. Our purpose is to bring about a moral defeat by keeping up the offensive until the political objectives are realized.’[9]

Part of the ‘moral defeat’ of the British came from their responses. Counter-measures such as curfews, mass imprisonments and executions raised international condemnation and alienated the population.

“EOKA was using very typical tactics. They were the same that Mao used against the Japanese, the same that the IRA used against the British. By the 50s, there were well-established tactics that you needed to use, if you were going to defeat a larger occupying power,” says Simon Innes-Robins, author and senior archivist at the Imperial War Museum in London.[10]

By the end of 1956, Britain started to regroup. Field Marshal John Harding was appointed Governor of Cyprus.

Harding was previously Commander-in-Chief of the Far-East Land Forces and had been involved in both the Malayan and Kenyan insurgencies.

One of his first initiatives was to reorganise the administration, the army and the police into one security force and to establish a joint intelligence agency.[11]

“At the start of the emergency the police force was pathetic. They had almost no intelligence capacity. There were only five interrogators who spoke Greek. It took them three years to get that fixed,” says Dr. David Anderson, history professor at Warwick University.[12]

The newly established forces managed to kill 69 guerrillas and reduced the number of EOKA’s branches from seventeen to five by February 1957.[13]

Although the campaign retained its popular support, EOKA was suffering organisationally. The British had gained control of the mountains and forced the guerrillas into the towns.

The continuing successes of the new administration forced Makarios to the negotiating table. By 1958, his relationship with Grivas broke down as the possibility of independence and not enosis started to be discussed.

The political support from Greece was also gone as it feared a confrontation with Turkey.

Two Greco-Turkish summit meetings were arranged for February 1959. The verdict for Cyprus was independence.

Makarios agreed to end the fighting. EOKA was disbanded and Grivas was recalled to Athens.

However, civilians suffered most. 238 Greek and Turkish Cypriots were killed by EOKA for being traitors or communists.

The settlement in Cyprus was an incomplete victory for all sides. Britain blocked enosis but British sovereignty was reduced to two bases. Greek-Cypriots gained independence but not enosis. Turkish-Cypriots abandoned partition and accepted independence under a Greek-Cypriot majority.

According to Dr. Andrew Novo a professor of Strategic Studies at the National Defense University, “given the character of insurgency-war, this should not come as a surprise”. Conventional warfare usually involves victory through the elimination of the enemy’s main force, the capture of the capital, and destruction of its industrial centers. In insurgencies, total victory is impossible.[14]

According to Kyriakides: “The final agreement was a curse. We fought for enosis and Makarios signed against it. Even worse, Turkey had the right to intervene in Cyprus. That was the end. We became Turkish, then and there. EOKA’s plight was not a victory. It was a political nightmare. Ever since Cyprus is in a never-ending downward spiral.”

[2] The Memoirs of General Grivas. 1965. Frederick A. Praeger. Edited by Charles Foley.

By In Cyprus
Previous article
Paphos: Home help in custody as police probe theft of ring worth €20,000
Next article
Satellite pictures of Cyprus’ dams before and after the rains