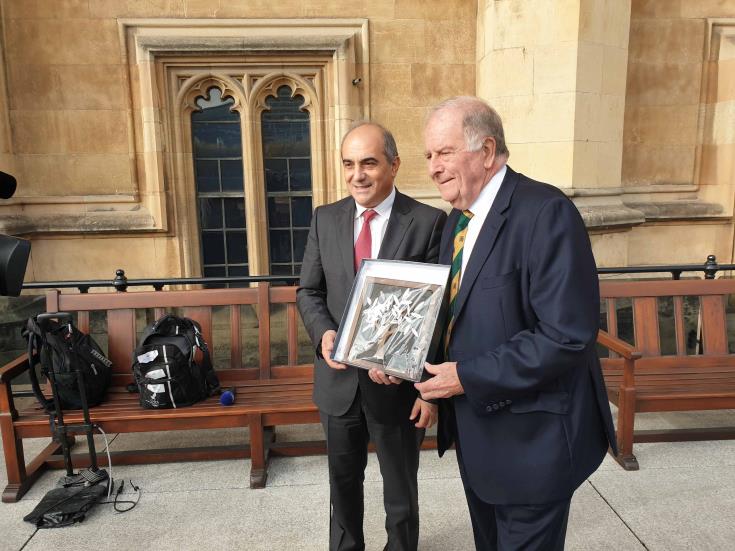 President of the House of Representatives Demetris Syllouris concluded on Wednesday the first day of a week-long working visit to the UK having met with a number of British MPs and education officials.

At the Houses of Parliament he attended a working lunch organised by the Conservative Friends of Cyprus and of Israel.

Syllouris had the opportunity to discuss the Cyprus issue and Brexit, but also to explore practical ways of enhancing the already strong relationship that Cyprus has with Israel and the UK.

Earlier in the day, the House President held a meeting with the head of the All-Party Parliamentary Group for Cyprus, Sir Roger Gale. On the agenda were Cyprus, Brexit but also current international issues of common interest.

The day had begun at the High Commission premises, where Syllouris met with officials from the British Council and Universities UK International. They explored ways of widening bilateral collaboration on higher education, science and research and development.

Later in the afternoon he held talks with the Scottish National Party’s leader in Westminster, Ian Blackford.

Summarising the day’s meetings Syllouris said: “The goal of the first meetings was to discuss cooperation on educational issues and on research, but also on other areas of economic nature. In the morning I met with dignitaries of the British Council who are interested in working with our universities. I also met with MPs, friends of Israel and Cyprus, with whom we discussed the same kind of cooperation, as well as enhancing in a practical way the tripartite partnership among Israel, Cyprus and Greece. The interest expressed is high and this was quite a different meeting as we all ascertained, because it was less political and more substantive.”

Syllouris added that the rest of his meetings will have the same objective of exploring practical steps towards enhancing relationships, but “without leaving behind all the other existing issues, our positions on the Cyprus issue or the problem with Turkey’s actions in the Cypriot EEZ, something understood by everyone. On this too we have talked about practical ways of dealing with Turkey’s attempts to interfere with the legal rights of the Republic of Cyprus”.

Sir Roger Gale said he was delighted that things on the Cyprus issue “seem to be moving to the right direction”. He noted that “there are still many obstacles to overcome until a settlement is reached”, but pledged that the British parliamentarians who  are friends of Cyprus will continue working with the House of Representatives and all Cypriots.

The Conservative Friends of Cyprus Chairman Jason Charalambous said that the working lunch was a celebration of the close relations between Cyprus, Israel and the UK. He noted that his organisation does everything it can to enhance this tripartite bond, not only on political level but also in the areas of security, culture, technology, tourism and others.