House of Representatives calls for unity to face Turkish threats 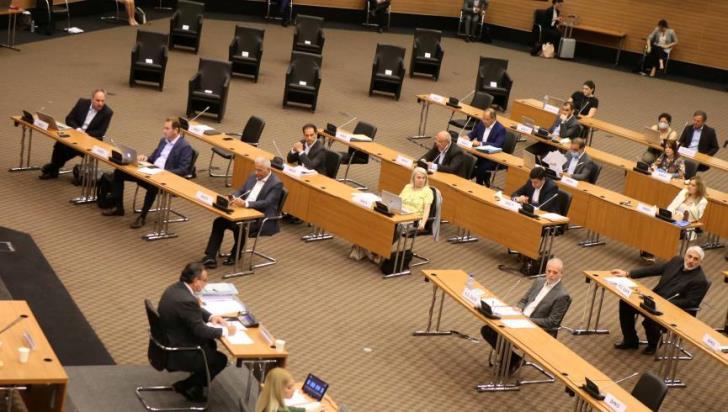 The House of Representatives, in an extraordinary session honoured those who sacrificed their lives during the 1974 coup and the Turkish invasion, with members making references to the imminent Turkish threats of the partial opening of the abandoned ghost town of Varosha in Famagusta.

Speaker Annita Demetriou, in her speech, in the presence of Cyprus President Nicos Anastasiades, said that paying tribute to all those who defended democracy and sovereignty of the country is a longstanding obligation and a reminder of the great responsibility we have in defending our national interests and survival of the Republic of Cyprus.

“The House of Representatives is calling on international community to decisively contribute to the creation of the conditions that through a constructive dialogue we can achieve a viable solution that will correspond to the expectations of Greek Cypriots, Turkish Cypriots, Armenians, Maronites and Latins”, she added.

The president of the House referred to the recent illegal decision of the Turkish regime to open a part of the coastal front of the fenced off area of Famagusta, a move which constitutes the start of settling the town. “We urge every democratic state that respects and maintains the principles of international law, to unreservedly condemn Turkey’s illegal actions which bring Cyprus a step closer to division, the only divided country in the world”,  she said,

As the parliament, we are stating our willingness and determination to continue the struggle for a fair and viable solution to the Cyprus issue on the basis of international and European law principles as well as UN Security Council resolutions, she added.

Following the church memorial service, wreaths were laid at the tombs of those killed defending the Republic.

Addressing the House, Democratic Rally leader Averof Neofytou, in his speech said a joint effort is necessary to avert new fait accompli which will have negative repercussions for the fenced off part of Famagusta, creating at the same time great obstacles in the overall effort to find a solution to the Cyprus problem. He called for a resumption of the dialogue for a solution the soonest, concentrating on international law, UN resolutions and the principles and values of the EU.

AKEL General Secretry Stefanos Stefanou, addressing the plenary said the situation regarding the Cyprus problem is more critical than ever and Turkey more provocative than ever. He stressed that, in anticipation of the illegal visit of the Turkish President to occupied Cyprus on the day of the anniversary of the invasion and information on the creation of new fait accompli in Famagusta, we must reflect on what we are doing and call for practical solidarity from the international community to put an end to the Turkish illegalities.

Democratic Party leader Nicolas Papadopoulos said we cannot accept a two-state solution, nor a solution with sovereign equality that will refer to a confederation, nor two self governed areas which will upgrade the illegal regime and lead to the non-recognition of the Republic of Cyprus. He also said that we should not allow the Turkish President to divide us and for him to determine who has the right to live in Famagusta. We must exhaust all available means to defend our national rights, he added.

The National Popular Front ELAM member, Linos Papagiannis said the people of Cyprus and Hellenism need to know the truth about what happened during the days prior to the coup and the invasion as it will help the younger generations not to repeat the same mistakes. He said the Turks are getting ready to settle Famagusta and are clearly talking about a two state solution and wondered what is the government’s reaction.

Socialist EDEK leader Marinos Sizopoulos said the situation is escalating dangerously with particularly threatening dimensions, taking complete advantage of the neutrality of the international factor. The Republic of Cyprus as an EU member state cannot possibly show apathy and a systematic submissive attitude, he remarked.

Democratic Front (DEPA) leader Marios Garoyian said everyone must work together and wisely, dedicated to principles and to find more effective ways to strengthen the status of the Republic of Cyprus and its geopolitical significance.

Charalambos Theopemptou, President fo the Cyprus Greens – Citizens’ Cooperation said we must continue creatively and with good will the effort to solve the Cyprus problem and reunite the island. Under no circumstances we must allow Turkey to achieve its goals and allow a two-state solution, he added.

By gavriella
Previous article
Extreme heat continues in Cyprus on Thursday, red alert in place for forest fires
Next article
Cabinet may decide on stricter measures for nightclubs as cases rise