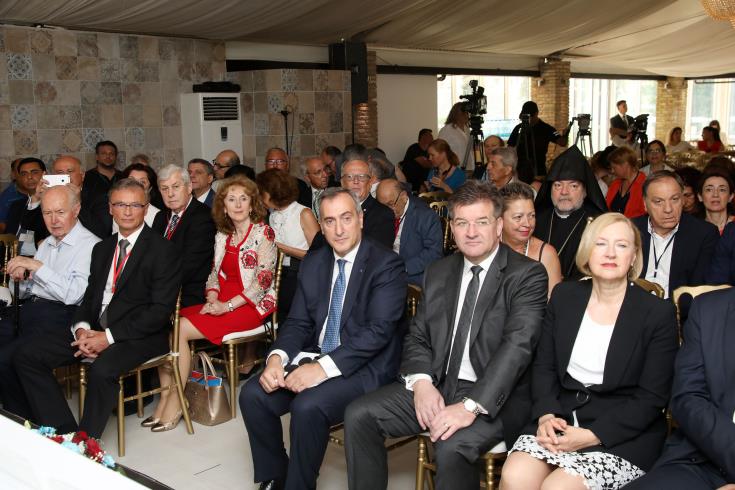 Hope still remains alive, in spite of the disappointment following events in Crans-Montana, and as the surveys show, a bi-zonal, bi-communal federation is still, at the present moment, the ‘most acceptable solution’ across the two communities of Cyprus, UN Secretary General’s Special Representative in Cyprus, Elizabeth Spehar, said on Tuesday, addressing an International Conference on the “30 years of the dialogue between Greek Cypriot and Turkish Cypriot political parties in service of peace in Cyprus”.

The Conference was organized at the buffer zone, in Nicosia, by the Slovak Embassy in Cyprus, on the occasion of the 30th anniversary of the bicommunal meetings of the Greek Cypriot and Turkish Cypriot political parties under the auspices of the Slovak diplomacy, and was attended, among others, by the Minister of Foreign and European Affairs of the Slovak Republic and Chairman in office of the OSCE Miroslav Lajčák, former President of the Republic George Vassiliou, former Foreign Ministers of Cyprus Nicos Rolandis, George Iacovou and Erato Kozakou-Marcoullis, Greek Cypriot and Turkish Cypriot politicians and Foreign Ambassadors to Cyprus.

Lajčák, who was a keynote speaker at the Conference, along with Spehar, said in his speech that Slovakia stands ready to maintain the role of honest broker and impartial mediator, as long as the Cypriots find it useful and helpful. He expressed the belief that it is possible to reach a settlement that unites Cyprus, stressing that “only Cypriots can decide on a vision for your future, and only Cypriots can exercise the courage necessary to make that vision real.”

In her speech, Spehar referred to the Cyprus problem, noting that negotiations have been in hiatus for close to two years now, with the UN striving to support the parties to return to viable talks through on-going consultations headed by UNSG’s Special Envoy Jane Holl Lute.

“The Secretary General has appealed to the sides to seize this opportunity with a sense of urgency, as we all know that time, after all these years, is increasingly not on the side of a solution. This multi-party, cross-communal forum should provide strong encouragement and active support to the leaders to redouble their efforts to return to dialogue. Parties are powerful actors on this island, and as I said in my remarks last February to this forum, with power comes responsibility. Will political parties in Cyprus be part of the solution, or part of sustaining the problem, going forward?,” Spehar added.

Referring to Confidence Building Measures (CBMs), she said that “solid support by the political track to initiatives that will bring practical benefits to the people on both sides of the island and help to build trust among the communities can only contribute to creating more propitious conditions for a sustainable peace in Cyprus.”

“In that respect, I commend the two leaders, Mr. Anastasiades and Mr. Akinci, for moving forward with important measures on permanent interconnectivity of the electricity grids, clearing Suspected Hazardous Areas of landmines and unexploded ordnance and committing to finally realizing mobile phone interoperability, among other recent CBMs. Many other important measures could be supported through your forum, for the benefit of the populations and as a concrete illustration that the sides can work effectively together to create a new, better reality on Cyprus,” she noted.

Spehar stressed the need for dialogue to continue, and to continue to invest in the forum of meetings between Greek Cypriot and Turkish Cypriot parties. She also underlined that more young people as well as women need to be brought into the discussions.

“And above all, as our Secretary-General António Guterres has said in reference to many global and local challenges, ‘Never give up’. UN sponsored polling found that a majority of Greek Cypriots and Turkish Cypriots want the leaders to return to negotiations and, despite increasing skepticism that a solution can be achieved, a majority want to see it happen. In spite of the disappointment following events in Crans-Montana, hope indeed still remains alive and as the surveys show, a bi-zonal, bi-communal federation is still, at the present moment, the ‘most acceptable solution’ across the two largest communities. In this context, how can the parties assume their responsibility and advance the cause of peace?”, she added.

On his part, Minister Lajčák said that the engagement and efforts of politicians from both communities through this 30-year bicommunal dialogue make him hopeful.

He stressed that the long tradition of bicommunal dialogue shows that there is still will, good intentions and determination, despite the current impasse in reaching agreement on a settlement of the Cyprus problem.

“Over the years, these meetings have sent strong messages in support of peace-process that should result in a just, viable and sustainable solution for Cyprus. They have also set a perfect example how to build trust and common understanding,” he noted.

The Slovak Minister stressed that the current status quo in Cyprus is unsustainable. “However, this does not mean that the only alternative is the permanent division of the island. Any solution should be based on the framework set by the UN Security Council, giving Greek Cypriots and Turkish Cypriots the right to live in a functional EU member state – in security and prosperity,” he said.

Referring to the CBMs, he said that they are extremely important and are crucial for building a strong foundation for a comprehensive and sustainable solution.

In a welcome speech, Head of the Representation of the European Commission to the Republic of Cyprus, Ierotheos Papadopoulos, noted the valuable contribution of the bicommunal dialogue between the political parties in helping maintaining the dynamics that one day may lead to the achievement of a viable and mutually acceptable solution in Cyprus.

Moreover, he noted that the EU appreciates the value of dialogue, which is the basis of the whole EU project, which aims at making war impossible.

Papadopoulos stressed that the EU is not only a champion of dialogue and consensus, but also constitutes the best guarantor of security for its member states.

Panelists at the Conference addressed two issues: “Impact of the bicommunal meetings of leaders and representatives of Greek Cypriot and Turkish Cypriot political parties on the progress in negotiations of political leaders of both communities” and “Significance of confidence building measures in activities of the bicommunal dialogue of political parties and the interaction with the civil society in Cyprus”.

Greek Cypriot and Turkish Cypriot politicians who spoke at the Conference underlined the significance of the dialogue between the political parties of the two communities in giving a boost to efforts for a negotiated settlement.