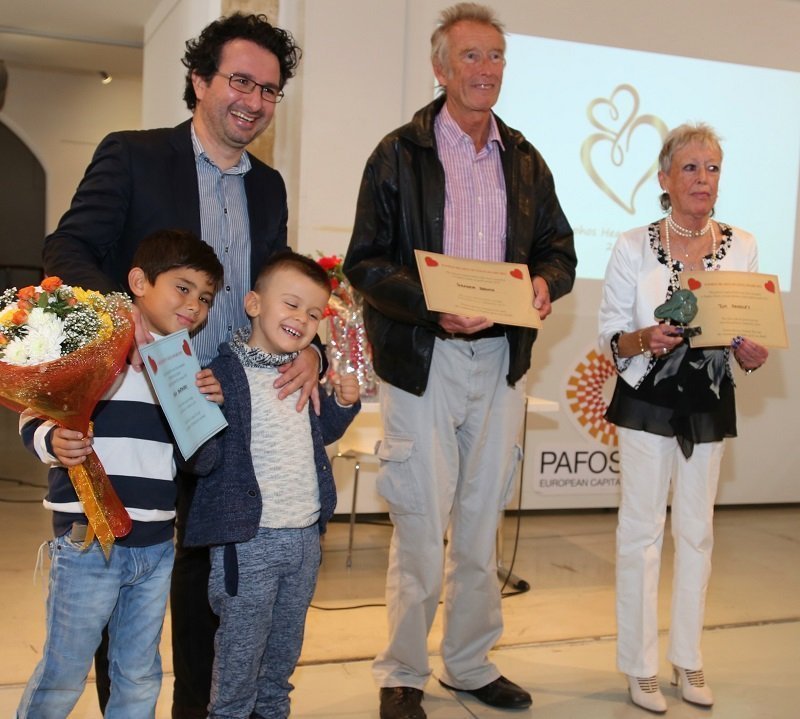 The nominees for the annual Hearts of Gold Cyprus awards have been announced and will attend an invitation-only awards ceremony to be held in Paphos.

The winners were due to be announced in a ceremony at Palia Ilektriki cultural centre in Paphos on Saturday, January 18, but it has been postponed to a later date due to a medical emergency.

Deserving children and adults from around Cyprus have been nominated by members of the public and a panel of philanthropic judges will vote in each of the four categories, choosing a winner and an honorary mention.

Awards Patron, Charalampous Theopemptou, MP said: “We had such a diverse range of nominees this year who are all doing wonderful things for the community or show tremendous spirit. I am very honoured to be part of the awards and look forward to meeting all of the nominees on Saturday.”

Nominated in the junior section are: The Philanthropy club of the International School of Paphos, ranging in age from 12 years to 14 years old, Zoe Dhull, aged 5, Suzie Vu Thuc Doan, 16, Millie Blue Wuldon, 14, Harriet Boe Wilden 11, and the children of the Learning Refuge Paphos, their ages are from 6 to 16 years.

All of these children are coping with courage in difficult situations, or are dedicated or determined, coping with illness, raising money for charity, or are excellent role models to others.

In the adult section, nominees include: Ali Maad for his courage and determination, Susan Lillingston for her volunteering, Elpida Violari and Gianoulla Nicolaou for their outstanding customer service, Josh Reynolds for organising a Christmas lunch for those in need, Hans-Jorg Wiedl (snake George) for his dedication to reptiles and snakes of Cyprus, Laurence Doughty for his charity work, Olga Sophokleous for founding Kivotos, a therapy and rehabilitation centre for children with special needs and Justen Karlsson for setting up the Lysos First Responders group.

Maya Iakoshvili is nominated for her support of the Russian community and charity work, Jim Hardacre for his ongoing mentoring of a disabled child, Valentina Christodoulou for her teaching skills, bus driver, Marina Kleopa, for exceptional care of her passengers, Gavrilis Teodorou for saving a life and manager of Paws dog shelter, Matthew Harris, along with the shelter volunteers.

Alexandra Kyriakidou is standing for establishing and running ‘the Alex farm of stray animals rescue’, Thamara Da Silva for her support of migrant workers and Angela Allery, the only volunteer at the municipality pound of Kiti in Larnaca.

Nieske De Jonge for her help and re-homing of abandoned and abused dogs, Celia Stavri for her charity fundraisers, Elaine Barker for her work with refugees at Caritas, Larnaca, and Mary Chognowski for her community art, caring attitude and volunteering with refugees.

Ivy Gibson for wonderfully knitted blankets for charities, Gaynor Georgiou for her commitment to the stray cats of Paphos old town and Keith and Wendy Watkins for their Akamas clean- up campaigns.

Irina Yakimovich for her community spirit, fundraising and standing against crime, Paphos Lifeguards for their outstanding dedication, Dikla Smith and Mikka Heaney for the Gift of Love initiative, Sue McCafferty for her charity fundraising Aquathon, and The Dr Yiota Demetriou Dancing Queen Foundation in Limassol, which supports programmes and raises funds and awareness for children with mental health challenges.

Anne Browne has been nominated for her volunteering with refugees and Petros Stylianou for his determination to overcome cancer and outstanding fundraising, The Friends Hospice volunteers and staff, Ruby Pearl Evans who volunteers at Polis dog pound and the Archangel Hospice volunteers.

The winners will be announced by the award’s patron and British High Commissioner, Stephen Lillie, at the event on a date to be announced soon.

Every nominee will be given a certificate and a flower and the adult and junior winners will be given a handcrafted solid gold heart on a pin, created by Aphrodite Jewellers in Paphos and a number of other prizes, including a bouquet of flowers and a hamper of handmade treats by Joulietta Chocolatier. The adult winner will also be given a weekend break with dinner at Almyra Hotel.

Renowned Cypriot artist Yiota Ioannidou is creating a Lifetime Achievement award and similar ones for the Junior, Adult and Jasmitha Awards.