Haji-ioannou: Increased cooperation between Cypriots from both communities is a success 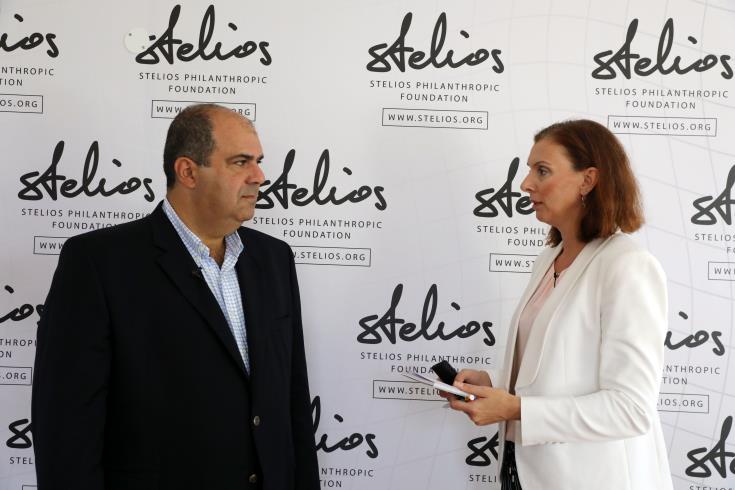 The Stelios Bi-communal Awards, which have been in operation in Cyprus since 2009,  have helped to destigmatise the cooperation and human relations between Greek Cypriots and Turkish Cypriots, Sir Stelios Haji-ioannou, founder of Stelios Philanthropic Foundation, told CNA.

He also made it clear that he does not want to become “Cyprus’ Donald Trump” and dismissed any notion of becoming involved in politics in any country he resides.

This year 50 bi-communal teams, 50 Greek-Cypriots and 50 Turkish-Cypriots, have each received cash prizes of €10,000 (total this year is €500,000). This year, nearly 700 Greek-Cypriots and Turkish-Cypriots collaborated and submitted their applications for Stelios Bi-Communal Awards 2018, to win one of the 50 cash prizes that are offered by Stelios Philanthropic Foundation. Since 2009, the total value of the awards that were granted to bi-communal collaborations adds up to €3,250.000.

Sir Stelios noted that ten years ago when they started they had difficulty in finding five companies from each of the island’s two communities to submit their proposal to the Foundation for consideration. This year, he said, the Foundation received 700 applications, a sign that after 10 years there is more cooperation between the two communities.

The highlight was last year when they had more than 800 applications, a record number for the Foundation, possibly because of people’s expectations from the ongoing peace talks, which culminated in July 2017 in Crans Montana but failed to yield results and reunite the country. Talk of bicommunal issues was very much on the cards at the time, Haji-ioannou noted.

In spite of the negative political climate related to the Cyprus issue, this year they had 700 applicants, he said, and mentioned in particular applications by two football teams from each community.

“Within 10 years we have managed to destigmatise the cooperation between the two communities, and that is a very good outcome for me. In our effort to support bicommunal awards which promote peace it is difficult to say ‘we have won’. Fair enough, this was another year without a war, that’s something. Nobody wants a war. And in this sense we have indeed achieved something,” the founder of the Stelios Philanthropic Foundation has said.

He assured that the bicommunal awards will continue as his philanthropic work will go on since as a member of the «Giving pledge» group he has a commitment to dedicate after his death half of his wealth to see this work carry on. Stelios Philanthropic Foundation will have funds to continue its work, he added.

Replying to criticism that actions like the awards lead to a compromise with the current status quo in Cyprus since what is rewarded is the exceptions while the general perspective remains the same, Haji-ioannou has said 700 people who have received the award maybe the exception in a total population of a million on the island but “it is better to have these people instead of not having them at all.”

He said that the category “partners in life” which encourages personal relations, stands out this year as they saw an increase in applicants. “We had 23 applications which is 46 people and we will reward 16 of them, which is 32 people,” he pointed out.  It is important to see the number of applications in this category increase and for people to have more personal relations, according to Haji-ioannou. The first couples were pioneers, he said.

Asked if he would consider cooperating with a a Turkish Cypriot businessman, Haji-ioannou indicated that he would rather not choose one person from the Turkish Cypriot community to set up a business. Instead, he explained, “I would rather share these philanthropic awards, a small amount to a lot of people and help many,” he added.

This for me is more tangible and more likely to continue, he said.

“I want more people to cooperate, for me this is success.”

Asked to comment on recent statements that the situation in the Cyprus problem is at a crucial phase, Haji-ioannou said that hat he does not have many contacts with politicians abroad and the only sure thing is that he does not want to become a politician.

Replying to another question, he said that Cyprus does not at the moment rank highly in international news. “Thankfully because we have peace and not war. Do not forget that 100 miles on the East, there is chaos,” he noted.

The average British thinks of Cyprus as a very good holiday destination, he does not think that there is a problem on the island, Sir Stelios said, adding that the solution to the problem is not to have British people to talk about Cyprus but the Cypriots to cooperate with each other. “This will happen when they start talking and cooperating with the other community,” he told CNA.

He said that he wishes for others to follow his example and give business or other awards, but it is difficult for him to try to change the opinion of people who have succeed financially and have their own views. It is easier for him to influence the people who have embraced the theory that “it is better to talk than not to talk, better to cooperate rather than not to cooperate”, he pointed out.

Referring to the changes made to the bicommunal awards his Foundation gives out, he said that this year 60% of the awards were given to new applicants, 20% to old winners and 20% to applicants who failed last year to receive one.

Haji-ioannou stressed that if the climate is better next year, they may increase the number of the winners and the prizes.