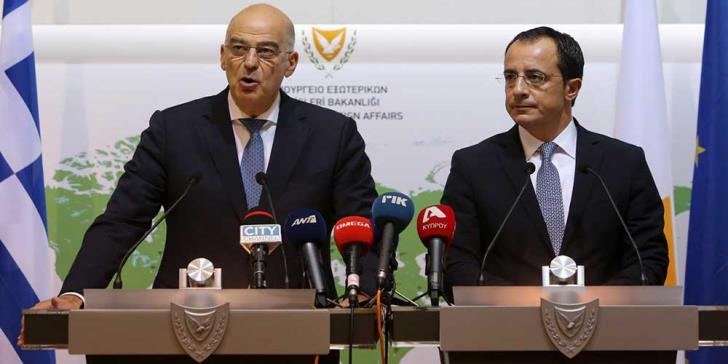 Greek Foreign Affairs Minister Nikos Dendias is visiting Cyprus on Tuesday so that Nicosia and Athens coordinate actions as Turkey escalates tensions in the Easter Mediterranean.

He is meeting President Nicos Anastasiades before holding talks with his counterpart Nikos Christodoulides, according to an official announcement.

The agenda of talks focuses on recent developments in the Eastern Mediterranean and the escalation of Turkish illegal actions in the region.

Moreover, the agenda will include the topics of the Greek-Cypriot cooperation both at a bilateral and European level, as well as in the context of trilateral alliances in the region.

The Foreign Ministry in Nicosia said in a press release that “the two Ministers will hold a tete-a-tete meeting to be followed by consultations in the presence of officials from both countries.”

“Discussions will focus on the state of play in the Eastern Mediterranean in the light of the continued escalation of Turkish illegal actions, placing special emphasis on the coordination of actions on all fields to counter this escalation.”

The two Ministers will speak to the press after the meeting.

The European Council reaffirmed its full solidarity with Cyprus, regarding the respect of its sovereignty and sovereign rights in accordance with international law.

In February 2020, the Council placed two persons under restrictive measures in relation to Turkey`s unauthorised drilling activities in the Eastern Mediterranean.