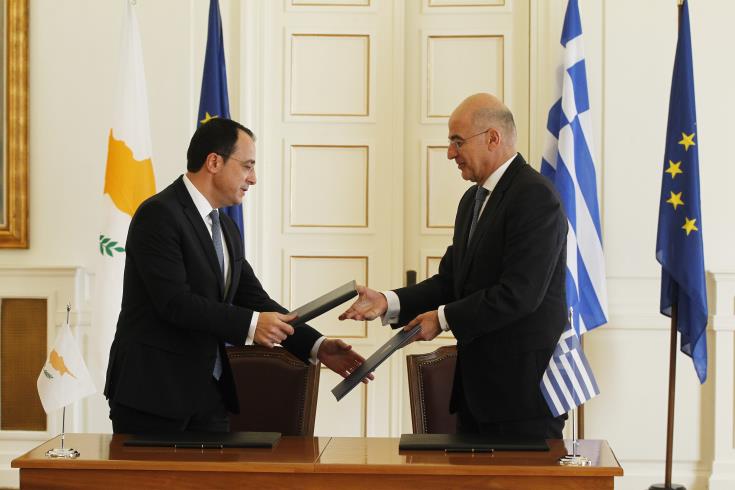 Cyprus Foreign Minister Nicos Christodoulides and his Greek counterpart Nikos Dendias discussed recent developments in the region of the Eastern Mediterranean, as well as the coordination of their actions to respond effectively to regional challenges at a meeting in Athens on Monday. Christodoulides and Dendias also signed a Memorandum of Understanding on Political Consultations and Technical Cooperation between the two ministries.

In statements to the Press after the meeting, Christodoulides said they discussed the coordination of actions to tackle regional challenges amid a fluid environment where certain states believe they can violate fundamental principles of the international law and sovereign rights of other states. For this reason, he noted, the coordination and undertaking joint initiatives are critical.

Furthermore, Christodoulides expressed the view that the EU is at a crucial crossroad and pointed out that its credibility and its future will be tested by its stance on some international and regional issues. “Greece and Cyprus have a clear approach and we are ready to play our part to help Europe to address the current challenges,” he stressed.

Asked by CNA whether the Republic of Cyprus is satisfied with Europe’s stance towards Turkey as well as regarding the targeted measures decided in relation to Turkey’s actions in Cyprus’ EEZ, the FM said that “it is important that the EU sends all the right and necessary messages to Turkey”.

He went on to say that the Republic of Cyprus wishes Turkey’s European perspective to continue, however, he pointed out, whether the relation between Turkey and the EU will advance solely depends on Turkey. He added that that the first discussion as regards the targeted measures is scheduled for next week, in Brussels.

On his part, Greek Foreign Minister said that during the meeting they discussed with his Cypriot counterpart Turkish illegal actions, which extend beyond the Cyprus’ Exclusive Economic Zone. Dendias added that they discussed developments in Iraq and Libya.

“Allegations about conspiracies that supposedly intend to exclude Turkey do not convince anyone”, Dendias said, while reiterating that Greece’s and Cyprus’ initiatives and cooperation with other countries in the region are not directed against any other country. He further stressed that any country that respects international law and other states’ sovereign rights is welcomed to join. He also described Turkey’s current stance as counterproductive and isolationist.

As regards the Cyprus issue, the Greek Foreign Minister noted that Greece is ready to contribute in every possible way to the process of finding a solution based on UN resolutions.

Referring to the two memoranda of understanding signed between Ankara and the Tripoli-based government in Libya, Dendias reiterated that they are invalid in legal terms and have destabilizing effect for both Libya and the wider region. Answering to a CNA’s question about the letter of the Iranian Embassy in Athens, warning that the use of US military bases in Greece in a possible aggression against Iran will be considered as a hostile act, Dendias said that tomorrow he will hold a telephone conversation on this issue with his Iranian counterpart Javad Zarif.

By In Cyprus
Previous article
Greece, Cyprus are ‘pillars of stability in region’ Pavlopoulos and Christodoulides say
Next article
Warren: Sanders said in 2018 meeting a woman could not win the White House