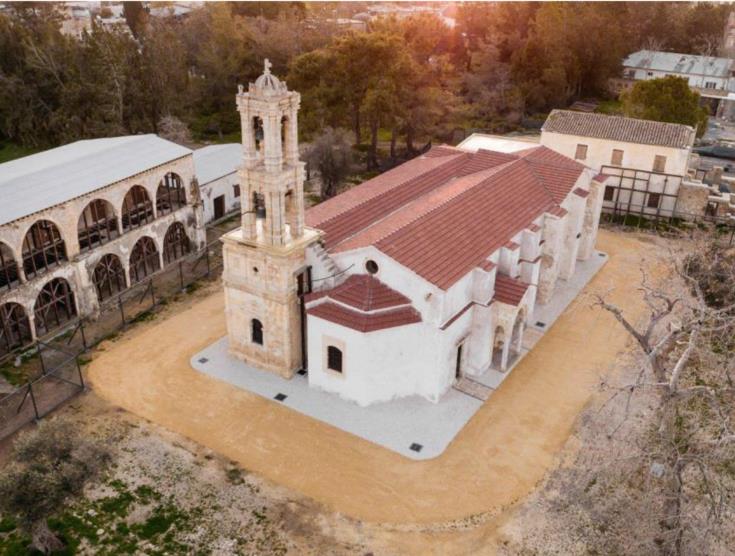 Greek and Turkish Cypriots joined forces on Thursday to protect and preserve the Monastery of St. Panteleimon in the Turkish occupied north of Cyprus after it vandalized only two years after it was restored.

Α community cleanup event was organised at the Monastery, in the occupied village of Myrtou, where representatives from the Technical Committee on Cultural Heritage, the European Commission and the United Nations Development Programme (UNDP) participated in the “Caring for our Cultural Heritage”.

The issue was reported in November in the Turkish Cypriot daily Kibris Postasi. Vandals broke the entrance doors and window panes, damaged the fencing, and painted non-political graffiti on the walls.

UNDP Cyprus Programme Manager, Tiziana Zennaro told volunteers and participants that the monastery was proudly conserved in 2016 mainly with the support of the European Union. It is not only important as a place for worship but also as a social and economic hub and as such is an inspiring example of Cyprus’s cultural heritage.

She said the people attending the ceremony demonstrate a strong, positive example of bicommunal cooperation and common responsibility. “As you know there have been some challenges with the maintenance and despite all effort, there is still a lot to be done,”she remarked.

It is up to each and everyone of you today to take responsibility and act as guardians of your shared cultural heritage, Zennaro added.

Ambra di Nuzzo, Programme Manager at the European Commission reminded that bicommunal teams took part in all phases of the conservation work while hundreds of Cypriots from both communities visited the site.

Now, she said, “the site is trying once again to pass a message.  We all share the responsibility for conserving our cultural heritage in our environment. The EC can spend more millions of euros, the UNDP can support for many years the work of the Technical Committee but ultimately it is up to the whole community, to keep our cultural heritage beautiful as it is”.

On his part, Turkish Cypriot head of the Technical Committee,  Ali Tuncay, said the committee is aware that the responsibility is tremendous and its effort aim at saving monuments throughout the island.

Unfortunately, he said, we encountered here some accidents. Tuncay conveyed two messages, that “we will not leave this monument alone. And second, we will not let this monument  be part of the blame game or to be used for political purposes”.

Agios Panteleimon Monastery is our common heritage. and we are dedicated to protect and maintain it, he said and thanked the villagers, Greek Cypriots and Turkish Cypriots who came to help clean up the monastery and who pledged to protect it.

Speaking on behalf of the Greek Cypriot representative, Glafcos Constantinides praised the significance of Agios Panteleimon as it is valued by all Cypriots and beyond. It was placed by the Committee very high on its agenda as one of its priorities.

“It is now time for Cypriots, all those who share this appreciation for this monument and make sure it is protected and respected,” he added.

Since 2012 approximately €14.7 million has been provided by the European Union to implement the priorities of the Technical Committee on Cultural Heritage for the preservation of the island-wide cultural heritage in Cyprus. Projects are implemented by the United Nations Development Programme.

At the beginning of the 20th century, ten monks lived in the monastery, the last one being Sofronios Michailides, who died in Myrtou on July 27, 1976, the day Saint Panteleimon is celebrated.