Greece stands by Cyprus in defence of its rights, Greek Premier says 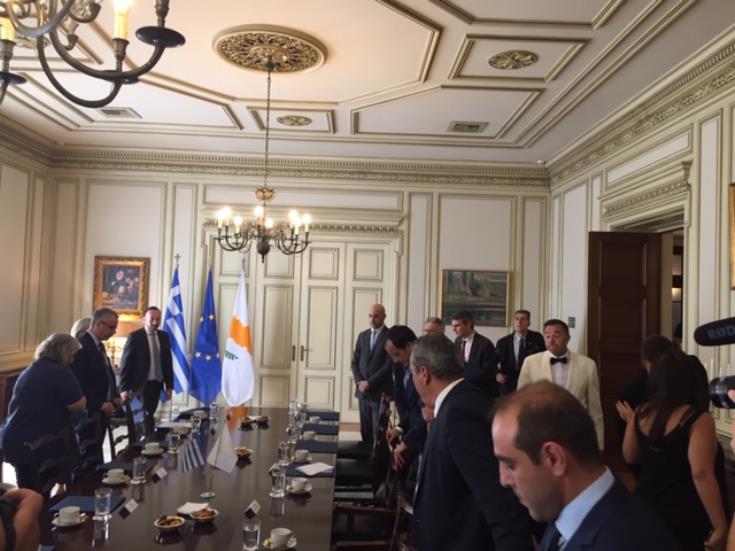 Greece’s Prime Minister Kyriakos Mitsotakis has told Cyprus President Nicos Anastasiades that his country remains firm in its support of the effort for a solution and that it stands by Cyprus in defence of its rights.

Mitsotakis was welcoming Anastasiades at his office in Athens where a working visit is taking place, on Tuesday.

He noted that President Anastasiades’ visit is deeply symbolic as he is the first head of state, he receives at Maximou Mansion.

This is a “sensitive time for the Cyprus problem” he said, adding that he was about to be briefed by President Anastasiades over his recent contacts with UN Secretary General’s envoy in Cyprus Jane Holl Lute and Turkish Cypriot leader Mustafa Akinci.

“Our aim is to end the occupation and the unacceptable guarantee status,” the Greek Prime Minister said, adding that the obstacles put forward by the other side do not lead to progress despite the Cypriot President’s sincere efforts.

Mitsotakis noted that Turkey’s illegal behaviour is provocative ad underlined that Greece will remain firm in the effort for a Cyprus solution and will stand by Cyprus in defence of its rights.

He continued pointing out that Turkey’s position goes against EU interests and that this should be understood.

On his part, President Anastasiades thanked the Greek Premier for his country’s consistent position and for the support in the necessity to finally reach a solution of the Cyprus problem.

He also noted that he would inform Mitsotakis over developments in the Cyprus problem and that he would also put forward his concerns especially after the unacceptable statements by Turkish Foreign Minister Mevlut Cavusoglu yesterday.

Turkey, he said, wishes to control the Turkish Cypriot community even after a solution of the Cyprus problem. “We have taken steps, we have created the conditions for the terms of reference,” he noted, adding however that Cavusoglu’s statements yesterday are a source of concern over Ankara’s intentions.

Anastasiades also said that a proper solution of the Cyprus problem would create the conditions for improved relations between Greece and Turkey.

The President of Cyprus is accompanied in Athens by the Minister of Foreign Affairs Nikos Christodoulides, Government Spokesman Prodromos Prodromou, Deputy Minister to the President Vasilis Palmas, the Ambassador of the Republic of Cyprus to Greece Kyriacos Kenevezos, the Director of the President’s Office Petros Demetriou and other officials.

Lute arrived earlier this month in Cyprus, in an effort to conclude the terms of reference that would pave the way for the resumption of settlement talks. After six rounds of separate meetings with Cyprus President Nicos Anastasiades and Turkish Cypriot leader Mustafa Akinci – and a social gathering in the presence of the two leaders, she departed without the task being accomplished.