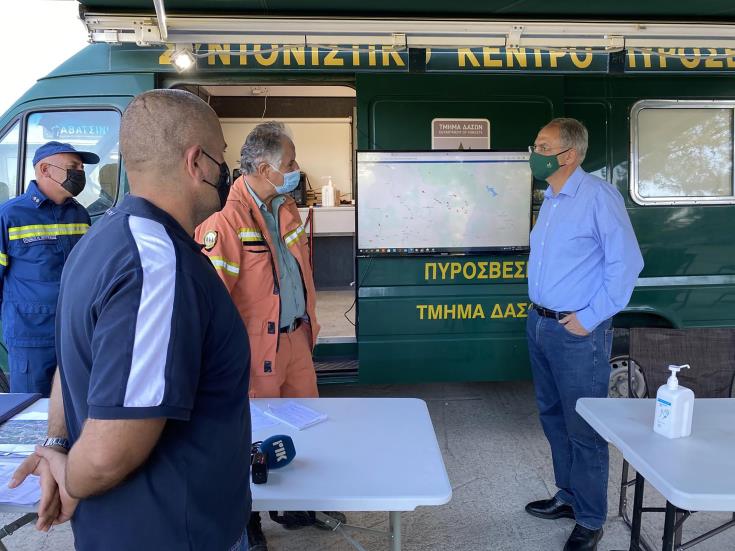 Two days after the devastating blaze in Cyprus which turned to ashes a large part of the mountain areas of Limassol and Larnaca district, Agriculture, Rural Development and the Environment Minister, Costas Kadis said that everything possible is being done to support the people affected.

Ora village, according to Larnaca District Administration, took the brunt of the damage. At the same time, the EAC is working round the clock to get the villages back on the authority`s network. A bank account meanwhile has opened for those wishing to financially contribute to the victims of the fires.

In remarks after touring the Larnaca region affected by the fires, Minister Kadis said the “picture is disheartening. We are here to see the damage caused to farmers and to send the message that we stand by them”.

Ministry officials are in the region to register the damages so there can be a specific proposal before the Cabinet for compensating the farmers. He said the process will be fast to help the farmers remain in their villages.

Kadis also said that the Ministry wants to encourage younger farmers to stay in their villages and become successful as this prevents fires from spreading. He said that the fire was controlled in areas where there was human activity and cultivation because there was water.

“We will talk to all farmers in the region and assure them that we will stand by them”, the Minister said so they can continue working like before.

Meanwhile, Larnaca District Officer Odisseas Hadzistefanou said the Ora community of Larnaca was the most affected community by the deadly fires.

He said that the fire resulted with four deaths, houses were burnt down, cultivations, businesses and vehicles. However, the Fire Service and the Forestry Department worked together to contain the fire.

Last night, Larnaca District Administration sent a complete report of the damages in the Larnaca region to the Ministry of Interior.

These included a total of 22 houses. Nine were in Melini, one in Odou and 12 in Ora village. An additional 36 holiday homes were destroyed, (nine in Melini, 25 in Ora and two at Agioi Vavatsinias. Eleven businesses were also destroyed, one in Agioi Vavatsinnias, four at Odou and six at Ora as well as 42 cars, six in Melini and 36 in Ora.

Ora, he added, was mostly affected compared to other Larnaca communities. A honey production factory and a poultry factory were completely burnt down too.

Meanwhile, the Treasure of the Republic has given to the public the details of a bank account at the Central Bank where those wishing to a contribution to support the people affected by the fires of Limassol and Larnaca district can deposit the amount they wish.

By gavriella
Previous article
Father who was repeatedly raping his daughter to go to jail for 16 years
Next article
EAC: Target is to restore power in Agioi Vavatsinias, Sikopetra and Profitis Elias