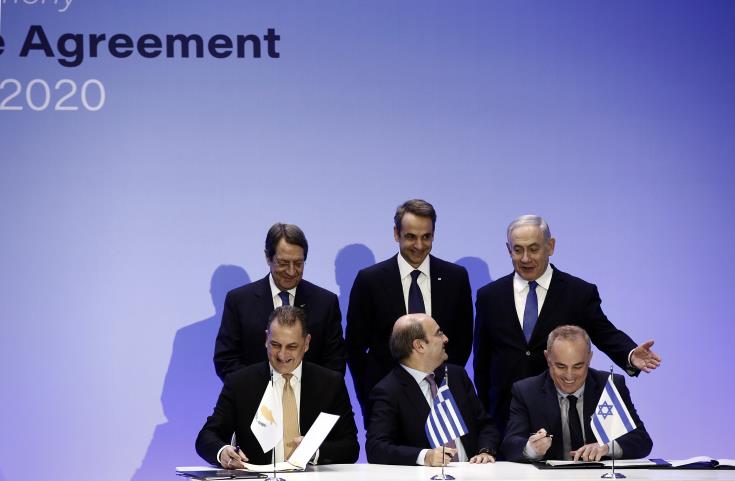 After the signing of the intergovernmental agreement on the EastMed pipeline by the Energy Ministers of Cyprus, Greece and Israel, on Thursday in Athens, we expect Italy to co-sign the agreement soon, Government Spokesman Kyriacos Koushos has said.

“The signing of the agreement serves the energy interests of not just the four participating countries, but of Europe as a whole as it provides an alternative solution for uninterrupted gas flow” to the continent, Koushos said. Speaking to CNA, he added that this is something Europe also acknowledges, by funding the pipeline’s feasibility studies.

Asked to comment on Thursday’s report by Greek daily “Kathimerini” saying that the Athens deal included a cooperation clause for the security of EastMed, Koushos said that this is something concerning the pipeline’s seamless operation and nothing else. The issue of how to protect the pipeline will be discussed by committees of the participating countries, he added.

He also pointed to the interest for the pipeline, also by the US, as seen with the recent bill endorsing the “Eastern Mediterranean Security and Energy Partnership Act” signed by US President Donald Trump. “Therefore, I believe that there is interest by other countries, apart from those signing the intergovernmental agreement”, the Spokesman said.

Asked about the reaction of the Turkish Foreign Ministry to the signing of the agreement, Koushos said that the leaders of Cyprus, Greece and Israel clearly stated that the agreement is not turning against any third country, while other countries are welcome to participate in this cooperation if they so wish.

Apart from its significance in financial and energy terms, the agreement is also an act of exercising the sovereign rights of the Republic of Cyprus, without turning against anyone, he added.

Koushos was also invited to comment on the statements of the Turkish Cypriot leader, Mustafa Akinci, who said that EastMed is not helping in the solution of the Cyprus problem. “As the President of the Republic repeatedly said, our side is ready to engage in the procedures for the resumption of Cyprus settlement talks” on the basis of a bizonal bicommunal federation, he went on.

He said moreover that last November, at the informal meeting with the UN Secretary-General and the Turkish Cypriot leader, in Berlin, President Anastasiades “reconfirmed his willingness to participate in a new round of negotiations and also reconfirmed the basis for a Cyprus solution, saying at the same time that he is ready for an immediate resumption of talks.”

Moreover, the Government Spokesman pointed to statements from the Turkish side, saying that they are not ready to engage in the next stage before the “elections” in the Turkish-occupied areas in Spring. Therefore, we expect that any actions will be taken after Spring and the “election” of the next Turkish Cypriot leader, Koushos added.

Asked about the decision of the Turkish Grand National Assembly to approve the dispatch of troops to Libya, the Spokesman said that the Republic of Cyprus is in favour of peace and stability in the region and deems that similar actions are not conducive to this.

He also referred to a quadrilateral meeting of the Foreign Ministers of Cyprus, Greece, Egypt and France, scheduled to take place in Cairo, where the various issues concerning the region are expected to be discussed, along with energy matters and the situation in the Eastern Mediterranean. The quadrilateral meeting is being prepared by the competent Ministers and announcements will follow, the Spokesman concluded.