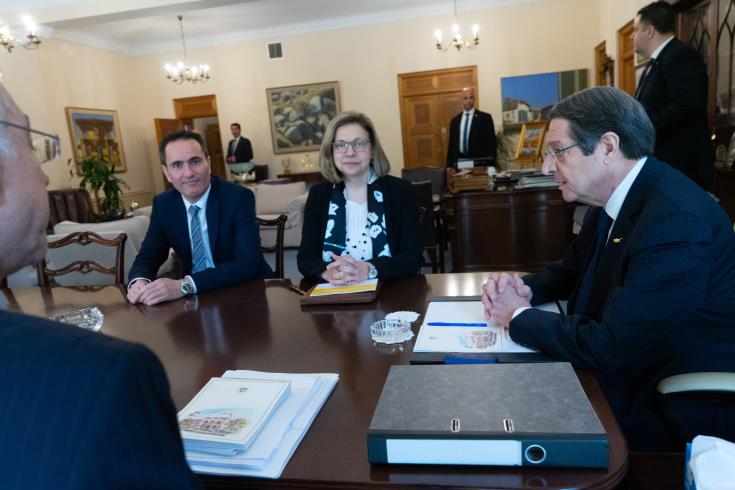 The discovery of a new gas field by ExxonMobil and Qatar Petroleum has given a new impetus to Cyprus’ Exclusive Economic Zone, the Chairwoman of the Cyprus Hydrocarbons Company (CHC), Toula Onoufriou, said on Tuesday, after handing over to the President of the Republic a report on the first five years of CHC.

“In this report we have listed the principles and the vision of the Board of Directors, which formed the basis for a solid development and course of the company based on the quality of our human resources, professionalism and the best international standard,s” Onoufriou told the press after her meeting with President Nicos Anastasiades.

She said that they highlighted the main fields to which the CHC has contributed substantially with its expertise and the actions it has taken in the hydrocarbons sector in Cyprus, always in cooperation with the Energy Ministry and all the other relevant bodies.

She added that they made suggestions for further empowerment and better use of the CHC within an improved broader framework of operation in order to do the best for the country in cooperation with other institutions.

“The CHC will be present to contribute with professionalism and its expertise to all developments” she noted.

Asked about the challenges facing the CHC, Onoufriou said that Cyprus has taken significant steps in the hydrocarbons sector and that the latest discovery of “Glafkos” gas field has given a new impetus.

Now, she explained, negotiations between Cyprus and Egypt on the sale of the gas of the Aphrodite field to one of Egypt’s two terminals have reached an advanced stage and added that they are also expecting the development of the negotiations with the consortium in block 12 (Noble Energy, Delek, Shell) on the revision of the revenue – sharing agreement.

“Negotiations are underway with the licensed companies with the aim to render it more economically viable and be able to proceed more effectively with the exploitation of this field”, said Onoufriou.

Discussions, she concluded, “have reached an advanced stage just like the negotiations with the most probable buyers in Egypt, but these things will proceed together in the next stage”.
(Cyprus News Agency)