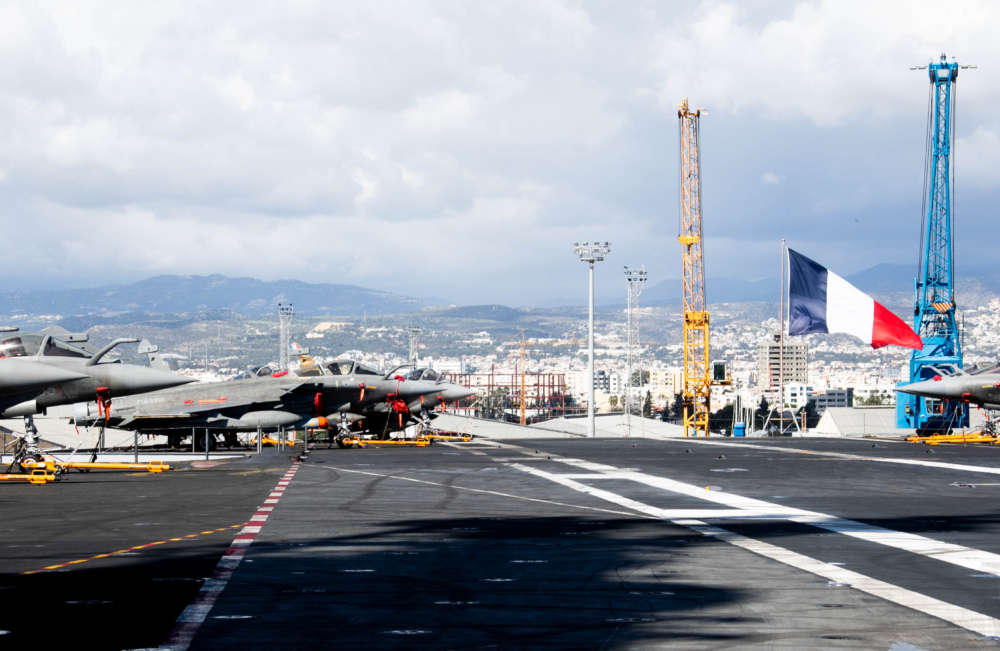 A frequent French naval presence in the Eastern Mediterranean and in particular within the EEZ of the Republic of Cyprus sends a clear message to those that aim to sow instability and tensions in the region, President of the Republic Nicos Anastasiades has said.

According to an announcement issued by the Presidency, in his address today at the reception held on board the aircraft carrier Charles de Gaulle docked in Limassol port, President Anastasiades said that “it is a great pleasure to be on board of this imposing aircraft carrier, the Charles De Gaulle, the flagship of the French Navy”.

Undoubtedly, he noted, “the deployment of France’s major aircraft carrier group to the Eastern Mediterranean region, and in particular here in Cyprus, is another testament of the on-going, qualitative upgrading of the relationship between Cyprus and France, a country which we consider both as a friend and a partner”.

“This relationship is not only mutually beneficial but also of strategic importance that seeks to address the serious challenges that we face in our wider geographical area,” he added.

He went on to say that “with France, whose role on the international scene is undoubtedly a decisive one, we share not only the same values, interests and concerns but also the same vision for peace, stability and prosperity in our region”.

Therefore, he said, “ the presence of this powerful aircraft carrier in our region contributes to the goal of achieving a permanent naval French presence in the Eastern Mediterranean and proves the will of France to act as a stabilizing factor in our neighbourhood”.

President noted that “Cyprus and France have enhanced their relations on multiple levels over the past years and we continue to aspire with the same resolve and determination to further deepen our cooperation, including in the fields of security and defence”.

“Not only the French Republic is one of the primary armament suppliers of the National Guard, but I am also glad to attest that over the past months we have enhanced our cooperation in the maritime domain, with the execution of joint naval exercises, the adoption of Standard Operating Procedures for maritime surveillance and ongoing efforts to upgrade the Naval Base in Mari,” he added.

President Anastasiades said in addition that “Cyprus and France also enjoy a flourishing cooperation in the energy field. The engagement of the French energy giant TOTAL in the Exclusive Economic Zone of our country has indeed opened new avenues not only for the benefit of both our countries, but also with the potential to significantly contribute to the diversification of energy routes with the aim of ensuring secure, sustainable, affordable and safe energy supply to Europe”.

Consequently, he continued, “a frequent French naval presence in the Eastern Mediterranean and in particular within the EEZ of the Republic of Cyprus sends a clear message to those that aim to sow instability and tensions in the region”.

“Regrettably, against this background of creating strong shared interests, Turkey continues to act in an aggressive manner by, amongst others, turning to military threats, illegal drilling activities within the Exclusive Economic Zone of the Republic of Cyprus, threats to occupy the fenced-city of Famagusta, and signing an illegal Memorandum of Understanding on the delimitation of maritime jurisdictions in the Mediterranean Sea with Libya”, he said.

“Actions which have been condemned in the strongest manner by the international community and the EU, since they do not comply with the notion of good neighbourly relations, international law and particularly the United Nations Convention on the Law of the Sea, and infringe upon the sovereign rights of third States”, the President noted.

He said that “these confrontational actions escalate tensions in our already very volatile neighbourhood, and have also extremely negative consequences on the prospect of resuming talks on the Cyprus Problem”.

Nonetheless, he added, “despite this adverse background, I assure once again of my willingness and commitment, once conditions permit it and an environment conducive to holding productive talks is in place, to engage in a new round of negotiations with the aim to reach a lasting, viable and comprehensive settlement to the Cyprus issue, in line with the relevant UN Resolutions and in line with the principles on which the EU is founded”.

“A settlement that will safeguard the sovereignty, independence and territorial integrity of the Republic of Cyprus, ensuring the peaceful co-existence of all Cypriots, Greek and Turkish, without any third country dependencies, military troops or guarantees”, he said.

In concluding, President warmly thanked once again the Ambassador of France, Ms Isabelle Dumont, as well as the Commander of the Charles De Gaulle, Captain Guillaume Pinget, for the invitation and underlined once again his appreciation and satisfaction for the thriving bilateral relations between the Republic of Cyprus and the French Republic.