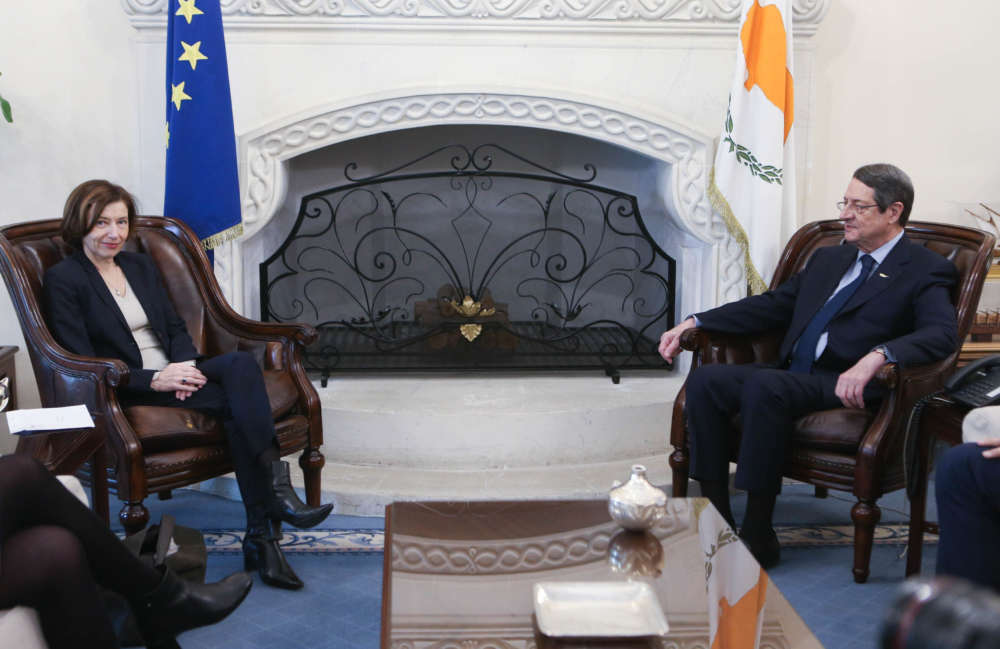 Minister for the Armed Forces of France Florence Parly has reiterated her country’s solidarity towards Cyprus with regard to its Exclusive Economic Zone (EZZ).

Parly was received by Cyprus President Nicos Anastasiades at the Presidential Palace on Tuesday morning. Cyprus Defence Minister Savvas Angelides was also present during the meeting.

In statements afterwards she told reporters that “it was an opportunity to express our solidarity regarding Cyprus which is under strong pressure from an international perspective. France is a friend of Cyprus and I reiterated our solidarity. That was my main message.”

Asked how the solidarity towards Cyprus is being manifested, the French Minister said that “the solidarity is manifested in many ways. We have a strong bilateral cooperation with Cyprus. Cyprus welcomes regular port calls from our navy and we are very grateful for that, and it participates in the efficiency at the aircraft carrier strike group operation, and we also express our solidarity regarding, for instance, on what goes on in the EEZ.”

Parly added that in the afternoon she will visit France’s aircraft carrier which sails in the area and is involved in the anti-ISIS coalition.

In his statements, Deputy Government Spokesman Panayiotis Sentonas described the President’s meeting with the French Minister as important, during which, he added, Florence Parly expressed France’s position of principle while they discussed ways on how to enhance bilateral cooperation between the two countries in particular in the defence sector.

Sentonas said that President expressed his satisfaction over the level of cooperation between the two countries as well as his gratitude for France`s firm support of the efforts to reach a solution of the Cyprus problem and for the defence cooperation that strengthens the state entity of the Republic of Cyprus.