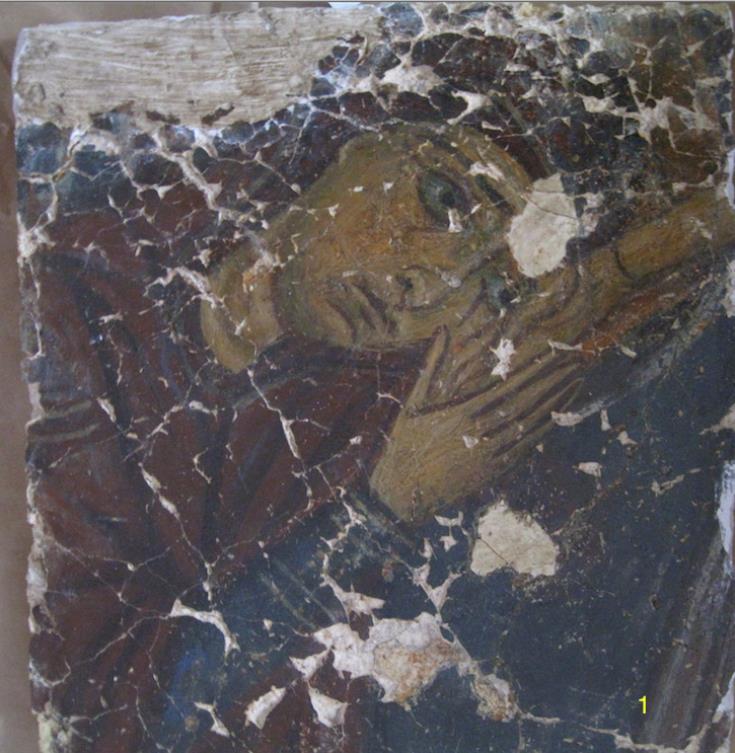 Four fragments of looted frescoes from the Turkish occupied part of Cyprus were handed over to the Republic of Cyprus after they were recovered by the international NGO Walk of Truth.

The frescoes were handed over to Transport Minister Vassiliki Anastasiiadou at a special event held at the Embassy of Cyprus in the Hague on Monday evening.

Two of the frescoes have been identified as belonging to the church of Panagia Apsinthiotissa, a Greek Orthodox monastery situated in the northern Turkish occupied part of the island. They are a portrayal of Virgin Mary attending the deposition of Christ and an image of a martyr. One fresco was stolen from the Church of Virgin Mary in the village of Assia whereas the exact provenance of the fourth fresco is not known.

The Minister said that the Church of the Virgin Mary in Assia is currently being restored by the bi-communal Technical Committee on Cultural Heritage and assured that all efforts are being made to establish the exact provenance of the fourth fresco. Anastasiadou pointed out that the true value of cultural heritage can only be appreciated in relation to the fullest possible information regarding its origin, history and traditional setting.

‘’In the words of UNESCO ‘it is incumbent upon every State to protect the cultural property existing within its territory against the dangers of damage, theft, clandestine excavation, and illicit export’,” Transport Minister said in her address.

She also thanked the NGO Walk of Truth and its founder Tasoula Hadjitofi “for her efforts towards the repatriation of these cultural objects.”

Hadjitofi said that the Minister’s presence at the ceremony sent a message of support to her and Walk of Truth and recalled the words of her father who once told her to always have in mind her homeland. She said that in all her life she has in mind a feeling of responsibility towards her country.

Hadjitofi also thanked everyone who helped her to recover the frescoes for their hard work and their support.

Willy Bruggeman, member of Walk of Truth Board and President of the Belgian Federal Police Board said that UN estimates that looting of art is an organised crime and its worth is five billion dollars annually.

David Burrowes, former MP in the House of Commons pointed out that we must work hard for the day when the recovered frescoes can return home and we need to make sure ‘’that it is a reconciled home for all Cypriots, based on fundamental human rights including freedom of religion and belief’’.

The uncontrolled situation in the Turkish-occupied area of Cyprus after the Turkish invasion in 1974 has fostered the development of a network of dealers in illicit antiquities whose aim was to sell out the cultural heritage of Cyprus. With the encouragement and help of the Turkish army, the trade in illicit antiquities has brought great profit to those involved, and Cypriot treasures already adorn private collections in a number of countries.

More than 500 churches situated in the areas under Turkish occupation since 1974 have been destroyed, plundered and looted or turned into stables, warehouses, restaurants and hotels. The Cyprus government and the church have repeatedly protested to the UN, the World Council of Churches and many other international and religious organisations. A number of Monasteries and Churches in the occupied areas have been restored by the bi-communal Technical Committee on Cultural Heritage.