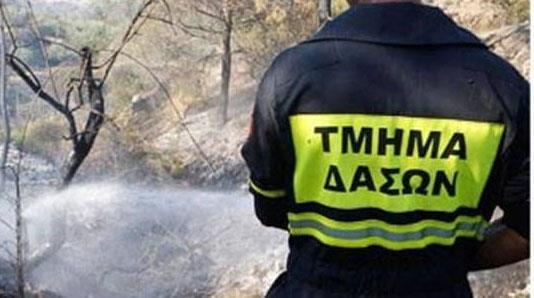 The Forestry Department has stepped up patrols  in recent days, fully aware that high temperatures, strong winds, combined with carelessness create an explosive cocktail for the island’s forests

Meanwhile, Justice Minister Ionas Nicolaou told CyBC radio on Thursday that authorities will be hiring another 50 fire fighters as part of stepped up efforts to prevent and combat fires.

The stepped up patrols are not connected to the devastating fires in Greece, but as every year, due to the high risk caused by the weather, Forestry Department director Charalambos Alexandrou told Phileleftheros newspaper.

The Forestry Department has the main responsibility for the protection of the forests from fires — and up to two kilometres from their periphery.

“We have increased patrols, particularly where we do not have observation posts. Small fire trucks accompany these patrols so that should there be a fire, the first battle can start pending the arrival of reinforcements,” he said.

Asked how he felt when  alerted about a fire, he said “every fire is bad news but particularly when it is from Trimiklini and up, I feel my pulse racing and I worry, as I fear a worst case scenario. That is why our instructions are to mobilise strong forces as quickly as possible so as to tackle it from the beginning or restrict the destruction,” he said.

He said that climate change, the abandonment of the countryside and the extension of the residential areas to forest areas, some without permission, are aggravating factors in the battle against fires

For his part, Fire Department spokesman Andreas Kettis said that what caused concern among fire fighters were strong winds and their change of direction. Attention was paid to where fire fighters are called in to action — for example whether it is accessible for water trucks and whether the fire is moving towards river beds where it can create the chimney or stack effect that accelerates the fire and risks trapping fire fighters.

Asked about vegetation on the side of roads, he said this should be cleared by late April early May so as to restrict the possibility of fires starting and spreading.

According to the Forestry Department contributing factors to the increased risk of forest fires in Cyprus are: high temperatures and the protracted drought; strong winds; rough terrain in the forests and flammable vegetation; abandonment of rural areas; increased tourism and the mass exodus of town residents to the forests.