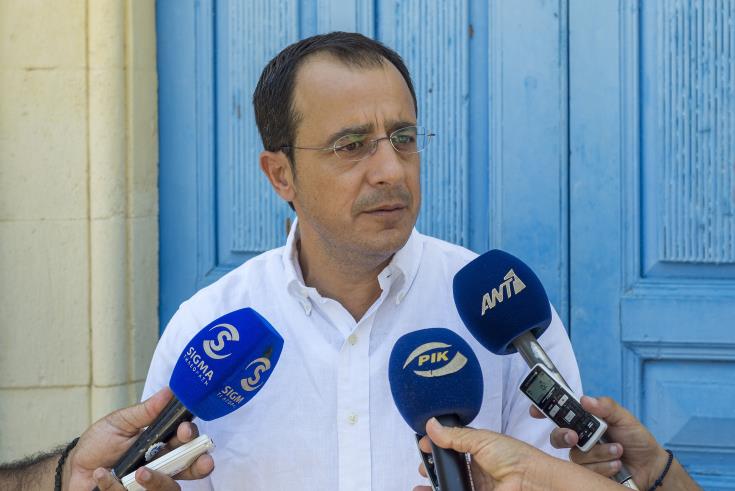 Foreign Minister Nikos Christodoulides expressed his satisfaction in relation to Exxon Mobil’s intention to accelerate procedures, ahead of scheduled offshore drillings in the exclusive economic zone of the Republic of Cyprus.
Asked Saturday about his meeting with Exxon Mobil’s Vice President, Tristan Asprey, in the presence of Energy Minister Giorgos Lakkotrypis, where they discussed geopolitical developments, Christodoulides said that energy planning designs go as planned. He added that during the meeting, the company expressed its intention to speed up the process.
Exxon Mobil’s Vice President for Europe, Russia Caspian and Asia Pacific / Middle East region, Tristan Asprey paid a visit to Cyprus for contacts with officials. The company plans two drillings in block 10, in Cyprus’ exclusive economic zone, starting in the fourth quarter of 2018.
The Minister was also asked about the results of a poll in Turkey, showing an increase in those supporting two independent states in Cyprus. In his reply, Christodoulides said that a poll conducted in Turkey should be of no interest, as the solution of the Cyprus problem is a matter that concerns Greek Cypriots and Turkish Cypriots. He also said that in his view, the overwhelming majority of Greek Cypriots and Turkish Cypriots agree that the status quo on the island cannot be the solution to the Cyprus problem.

“It is up to us, Greek Cypriots and Turkish Cypriots, to decide over our future” Christodoulides concluded.

By In Cyprus
Previous article
WORLD CUP 2018: GROUP H
Next article
More than 400 companies under administration