FMs of Cyprus, Greece and Jordan committed to intensify and expand cooperation 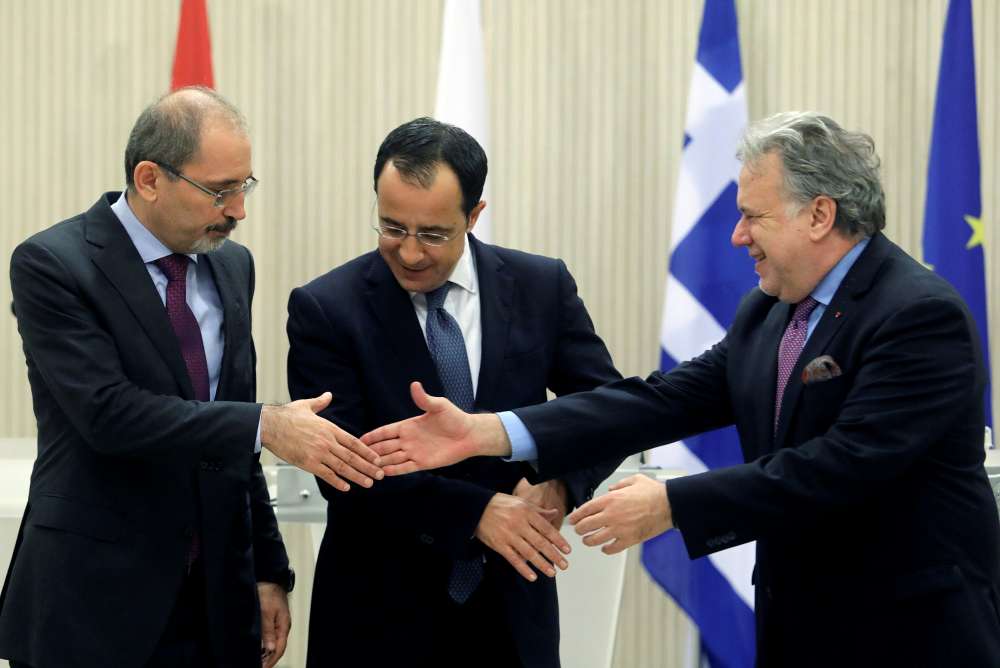 Foreign Ministers of Cyprus, Greece and Jordan have expressed their commitment to intensify the three countries  cooperation in fields in which they already work together, while exploring opportunities for cooperation in other fields of mutual interest.

A Joint Statement issued after the meeting said that the Ministers engaged in a thorough exchange of views on a number of regional and international issues, including the efforts to end the stalemate in the Middle East Peace Process on the basis of two-state solution, developments in Syria, migration, combating terrorism and security, including energy security. Moreover they discussed about the Cyprus problem and EU-Jordan relations.

According to the statement, they expressed their satisfaction for the common approach and their peaceful commitment to further enhance cooperation and coordination, in order to address the challenges of the region. Moreover, decided to elaborate further on the idea of establishing a Permanent Secretariat that Cyprus has offered to host, in order to present it at the forthcoming Summit.

The statement underlined that the three countries view this trilateral partnership as an important tool that contributes in a practical and result oriented manner to the collective efforts to achieve our common goal of peace, security and prosperity in our region. Furthermore, the trilateral mechanism creates synergies in areas of mutual interest and prepares the ground for mutual understanding and enhanced regional cooperation, it added.

It noted that the Ministers reviewed the progress achieved in the fields endorsed by the Leaders during the first Trilateral Summit namely: renewable energy resources and energy efficiency, management of water resources, agriculture, aquaculture, tourism, transport and merchant shipping, protection of antiquities and health. They expressed their commitment to intensify cooperation in these fields, while exploring opportunities for cooperation in other fields of mutual interest.

Moreover, recognising the added value and the growing momentum of the trilateral mechanism the Ministers also discussed further ways to improve its effectiveness, enhance coordination and ensure that both the mechanism’s potential and momentum are fully exploited and developed.

In statements after the meeting, FM Christodoulides said, among others, that “we share the understanding that our cooperation contributes to our common goal of promoting peace, security, stability and prosperity in our region.
We will continue to work together, on the basis of a positive agenda, to achieve concrete results that would ultimately benefit our three countries, our societies and the wider region.”

He noted that he briefed his two counterparts on the latest developments regarding the Cyprus problem. He expressed deep appreciation for Jordan’s principled stance and support on the Cyprus problem and reiterated “the sincere gratitude of the Cypriot people for the continuous support of Greece to our efforts.”

On his part, Safadi said that he conveyed a message from King of Jordan Abdullah II to Cyprus President Nicos Anastasiades emphasizing their pride in Jordan for having developed and strengthened their cooperation with Cyprus and Greece.

He  stressed the role of this trilateral partnership in efforts to bring about peace and stability in the region and ti achieve a high degree of economic, trade, investment, defence and security cooperation.

He expressed Jordan’s gratitude for the support it is getting from Cyprus, Greece and other EU member states, in terms of tackling the many challenges it faces.

Thus far we’ve been able to achieve a lot but I think the road is still full with opportunities that they are determined to use every opportunity to the benefit of the countries and their peoples, he added.

He said that his country looks forward to hosting the second Trilateral Summit in the first half of 2019, noting that they will ensure that the Summit does come up with more deliverables that will institutionalize this cooperation and deliver results to the counties and their peoples.

Greek Alternate FM Katrougkalos stressed that the three countries are not just pillars of stability. “We want to export stability in the area.  And we share the same values, respect for international law, the resolutions of United Nations and under this angle we approached the Cyprus issue, the Palestinian conflict and all the other very important conflicts in our region, Syria above all,” he noted.

He noted that  Greece and Cyprus are promoting many trilateral schemes of cooperation in the area and that Greece has tried  to establish a regional system of stability and cooperation, the Rhodes Conference, stressing that “we especially value Jordan’s role in this endeavour.”

Moreover, he noted that “we have a common interest in promoting prosperity, and we have discussed how to be more productive and more concrete in this effort to promote the joint efforts of our economies. We have agreed to build tripartite committees in the areas of energy, tourism, trade and commerce,” he said, adding that a private forum will also be scheduled because they fully recognize the fact that private sector is producing wealth.

By In Cyprus
Previous articleTrump starts withdrawal of U.S. forces from Syria, claims victory
Next articleBeautiful Troodos from above (video)