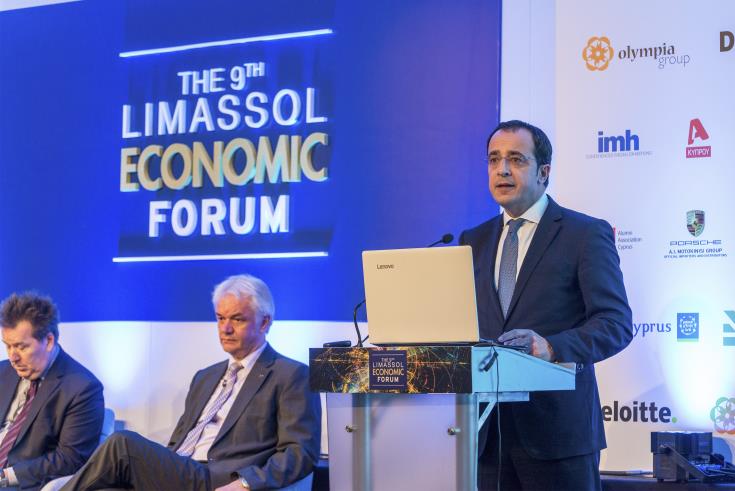 Cyprus has stressed the importance of the EU applying the necessary political pressure on Turkey, given its role to managing migratory flows, in particular with a view to Turkey fulfilling all of its obligations in a non-discriminatory manner, Foreign Minister Nicos Christodoulides has said.

He also pointed out that Cyprus’  basic premise, in effectively tackling humanitarian migration crisis,  is that EU must look to root causes of crisis and address them and the key component in doing so is to engage more actively in the Eastern Mediterranean.

Christodoulides on Friday delivered a speech titled “The Migration Crisis: Europe’s Political Vision and how the crisis affects South Eastern Mediterranean and the Middle East”, at the 9th Limassol Economic Forum.

He said that Cyprus wants to have a more active involvement within the EU, beyond issues that directly touch upon the Cyprus problem  and has worked methodically to build its voice in Brussels on an array of issues where Cyprus has a strong added value.

“To the deep and complex challenges we face, Cyprus strongly believes that the answer is more Europe, a stronger Europe with a more robust footing in international relations. We must look back to the core of the values that bind our Union together and project it outwards. At the same time, our messaging within the EU in addressing not only the migration crisis, but also other crises our Union faces, always has as a common denominator the need to preserve EU unity, solidarity and burden-sharing,” he added.

FM said that Cyprus has advocated from the very beginning for a holistic approach that strikes an effective balance between responsibility and solidarity, and fair responsibility-sharing among Member States, analogous to their integration capacities.

“We have strongly made the case for the need to find a fair, sustainable and effective European solution to this common challenge we are faced with. Cyprus has also raised the flag within the EU on the need to be vigilant regarding all migratory routes”, he said.

The Minister also pointed out that within this framework, Cyprus has fulfilled its relocation obligations in accordance with the 2015 Council Decisions, and never abstained from any solidarity measure put forward by the Commission.

“This is despite the very complex challenges that Cyprus is faced with, as an EU member state at the heart of the hotspot area, with no effective control of part of its territory and its northern external sea borders, due to Turkish military occupation, and with the presence of Turkish settlers in the occupied areas already creating serious demographic changes”, he said.

Furthermore, he added, Cyprus is providing financial assistance to Jordan and Lebanon to support their efforts regarding the reception of Syrian refugees, and has contributed with the amount of 100,000 euro to the EU Trust Fund for Africa.

The majority of the arrivals, the Minister said, originate from Turkey, despite its obligation, according to the EU-Statement, to deter irregular migratory flows towards the EU and stop new routes from emerging. Recently we have registered increase on the irregular flows from neighbouring countries.

“The situation is further complicated by the fact that Turkey refuses to cooperate with Cypriot authorities, not implementing vis a vis Cyprus, the EU-Turkey Readmission agreement. We have stressed the importance of the EU applying the necessary political pressure towards Turkey, given its role to managing migratory flows, in particular with a view to Turkey fulfilling all of its obligations in a non-discriminatory manner”, he added.