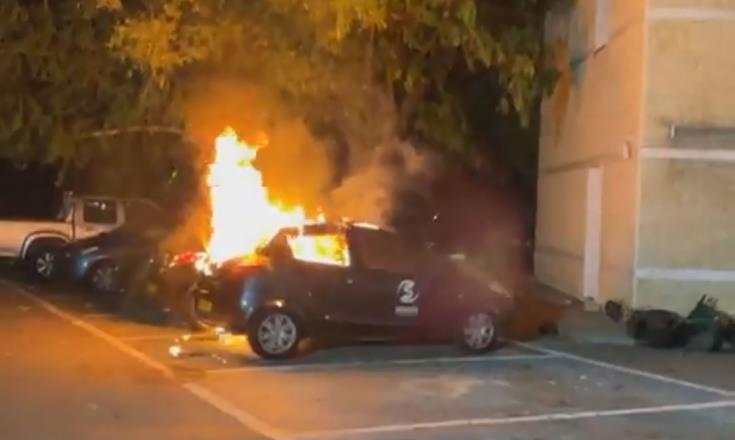 Five people will appear before court on Monday after protesters against measures to fight COVID-19 and the vaccination programme attacked the premises which houses Cypriot television station SIGMA and the Dias group of companies.

Audiences were shocked as the anchor of the main Sunday news announced the station was under attack, the entrance was overtaken, cars were on fire and employees were hiding.

The attack came after the protesters, who are against the presentation of a “SafePass” and the vaccination programme staged a demonstration outside the Presidential Palace.

Video clips that circulated on social media from SIGMA’s journalists showed molotov bombs hurled at parked cars on site while extensive damage was reported in the station’s entrance.

President of the Republic Nicos Anastasiades, in a message on Twitter said the attack against SIGMA is an attack against democracy and legality and will not be tolerated. The state, he added, will respond harshly to those who ignore laws. The health, safety of citizens and democracy will not be left in the hands of irresponsible citizens”, he said. In a written statement, President Anastasiades said the attacks threatened lives and destroyed property. The state, he said, will not be threatened by anyone, even so by persons who cite illogical theories of conspiracy, trying to lead the country into mediaeval ages.

President of the Union of Cyprus Journalists, George Frangos said the unprecedented attacks against the DIAS group, which encompasses SIGMA TV, are abominable, insubordinate and dangerous for the Republic. He also said he will inform the European Federation of Journalists.

Four people were arrested in connection with Sunday night’s attacks against DIAS while Police is also looking for ten more people while more suspects will be identified from CCTV footage.

Twelve members of the police Force were injured with seven having to receive first aid treatment.

Read More: These are the 10 people sought by Police for incidents at DIAS (photos)