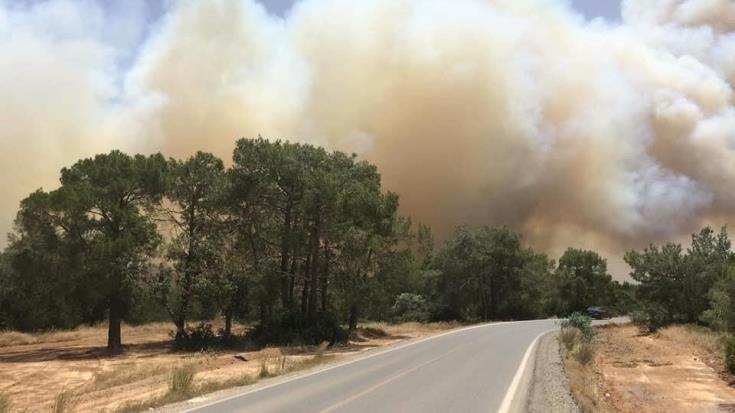 A fire fanned by strong winds is raging near Diorios and Kormakitis in Turkish-occupied north Cyprus and the Republic of Cyprus has sent a fire fighting aircraft of the Forestry Department to assist.

A Forestry Department airplane has been responding to the fire since early in the afternoon and a helicopter from the Search and Rescue Centre is expected to join the effort.

The Republic has also made available three of the new fire trucks it has just taken delivery of which, if requested, will  help battle the blaze, he said.

In a written statement later on Sunday, Koushios said that President Nicos Amastasiades had spoken this afternoon by telephone with the Turkish Cypriot leader who thanked him for the aircraft assisting the fire fighting efforts.

Anastasiades assured Akinci that he would make available  any help required by Turkish Cypriot compatriots, the spokesman added.

Earlier, the Turkish Cypriot media had reported that a request has been made for two helicopters from Turkey to help fire fighters.

Akinci who visited the area said green areas were being destroyed. He said it was too early to say how the fires had started.

CNA reports that the Diorios-Myrtou road has closed to traffic because of the fire.

Temperatures have soared to above 40 C as Cyprus experiences a heat wave.

At least four fires broke out in the government controlled areas on Sunday, one on the Nicosia-Limassol highway, two near Ayia Napa and one in Ypsonas. These have all been contained.

By In Cyprus
Previous article
Two new Covid-19 cases, none at schools
Next article
Ap. Varnavas lyceum pupils, staff to be tested for Covid-19