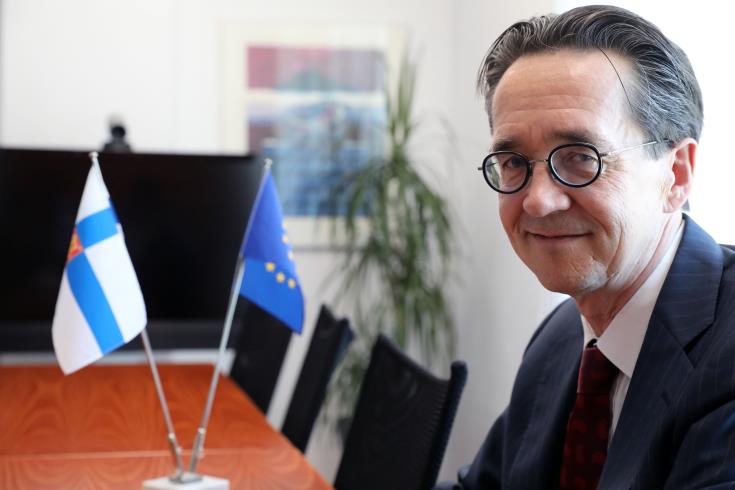 The Finnish EU Presidency stands behind the conclusions of the European Council as regards Turkey’s activities in the Eastern Mediterranean and the process being followed, Finnish Ambassador to Cyprus, Timo Heino, has told the Cyprus News Agency (CNA), adding that “now the ball is with the European Commission and the EU High Representative and these institutions will take this issue forward.”

“Our role as the Presidency is to support this process,”,Heino noted, while asked about Turkey’s EU course, he stressed that there are no plans for opening any new chapters in the framework of its negotiations for EU membership. “We know the situation very well, so there are no changes in the horizon during our Presidency on this,” Heino underlined.

The European Council expressed last month “serious concerns over Turkey`s illegal drilling activities in the Eastern Mediterranean” and endorsed an invitation to the Commission and the European External Action Service (EEAS) “to submit options for appropriate measures without delay, including targeted measures.”

“Once they are submitted to the Council we will examine them,” Heino told CNA.

Turkey issued in May a navigational telex, announcing its intention to start drilling off Cyprus until September 3. Since May 4, the Turkish drill ship “Fatih” is located almost 40 nautical miles west of the Akamas peninsula and 83 nautical miles from the Turkish coast. The area falls within the EEZ of the Republic of Cyprus.  A second Turkish drill ship, “Yavuz”, was also dispatched to the Eastern Mediterranean.

Asked about the role of the EU in efforts for a Cyprus settlement, Heino said that the EU has been for a long time supporting the efforts to find a settlement, based on a bizonal, bicommunal federation and this policy is still in place. “Of course, we would very much like to see progress in the process of solving the question”, he added.

Referring to the Finnish Presidency’s priorities, the Ambassador said that sustainability is the cross-cutting theme of the Presidency.

“Sustainable Europe-Sustainable Future is our leading priority and of course it has to do mainly with climate change. Tackling the  challenge of climate change should be a common denominator of all EU policies, common policies and national policies as well. Otherwise we cannot tackle this challenge,” he noted.

We have four main priorities: to strengthen common values and the rule of law, to make the EU more competitive and socially inclusive, to strengthen the EU’s position as a global leader in climate action, and to protect the security of citizens comprehensively, the Ambassador said.

He went on to say that the new challenges are described in the EU strategic agenda, which was recently adopted, and that the Finnish Presidency is the first one to implement this strategic agenda.

Then we have an inherited agenda as well, where you don’t start from scratch. It is the Multiannual Financial Framework, Brexit, migration and the Economic and Monetary Union, he added.

Asked about Brexit, the Ambassador noted that they are now waiting for the new UK Prime Minister, to see his views on how to move forward.

The Presidency very much hopes that Brexit will not dominate the EU agenda, he said. “We have the Withdrawal Agreement and this would be a good way to move forward if the British support this. Of course we would not like the Brexit to dominate the agenda, because we have so many other challenges which we want to tackle,” he added.

With regard to migration, he noted that this issue is included in the Finnish Presidency programme, stressing the need for a comprehensive management of migration.

We have to take both the internal and external dimensions into consideration. We think that the Common European Asylum System as a package would have been the most effective measure, but it has turned out not to be achievable. One way would be to go forward step by step and take a look at the proposals one by one, and if we can find an agreement, delivering concrete results, Heino noted.

Moreover, he said that “we need to establish an EU resettlement system and demonstrate solidarity with the countries which are receiving lots of immigrants. We need to tackle this together, nobody can do it alone,” he stressed.

Referring to the EU Common Foreign and Security Policy, the Finnish Ambassador said that “we want to enhance EU External Action so it can strengthen the EU as a global actor”.

“Unity, coherence and effectiveness are needed.  For example, the possibility of using qualified majority voting in some areas of the Common Foreign and Security Policy as established in the Treaty of Lisbon merits further discussion,” he added.

He went on to say that “one sector which has developed very promisingly in the last years within the EU is the defence dimension. And we think that it is important to continue. We believe that we need to do more, and we want to ensure the efficient implementation of the decisions which have been taken already in this field,” he added.

He noted that there are many challenges as terrorism and hybrid threats, which need to be tackled, indicating that there is a Centre of Excellence for Countering Hybrid Threats in Finland.

Moreover, he said that other issues on the agenda are, among others, the EU-NATO cooperation, military mobility, digitalization and artificial intelligence with a view to strengthen European Security and Defense Cooperation.

We know that China, USA and India are developing very rapidly in the digital revolution and we don’t have a choice. We need to be one of the leading players in these fields. This is also essential to the European business, investments, innovation and sustainable economic growth, the Finnish Ambassador noted.

As regards EU enlargement, Heino said that it is important that Western Balkans enlargement prospects are kept alive.

“Our Presidency programme clearly refers to the criteria for membership, that the EU common values and the rule of law have to be respected by the existing members and also by the candidate countries for EU membership, which are judged based on how they fulfil the criteria,” he noted, adding that the opening of accession talks with North Macedonia and Albania will be considered during the Finnish Presidency.

Moreover, the Finnish Ambassador expressed hope that the European Parliament will endorse the decisions taken by the European Council as regards the EU top jobs, noting that “the European Commission and other institutions will be changing in the middle of our Presidency, so it would be very helpful for us if these nominations would move forward as planned.”

Heino also said that in many EU countries traditional parties have lost ground and “in the European elections we saw a fragmentation of the political party system, which makes it more difficult to reach decisions in the EU. This is a new challenge and that is why we need to strengthen the EU and go back to our common values and principles, and respect them,” he noted.

Asked about the bilateral relations between Cyprus and Finland, Heino said that his country has been very committed in solving the Cyprus problem since the ‘60s, as the first UN Special Representative on Cyprus, in 1964, was Finnish national Sakari Tuomioja.

“We have been trying to be as supportive as we can, and we have had thousands of Finish peacekeepers here. Now we don’t have any, but during the last five years we have been running a special programme called Startups 4 Peace, bringing young entrepreneurs together from both communities,” he added.

“We give them seminars and workshops and bring in Finnish experts to help them, to coach them. This year we have eight teams. Throughout the years, we have had more than 50 teams, plus an alumni network from both sides,” the Ambassador said.

He noted that this is a Confidence Building Measure and Finland’s contribution to the civil society and efforts for solving the Cyprus problem.

Moreover, he said that there is a lot of interest in Cyprus regarding the Finnish education system. “We are very much willing to share our experience and good practices,” he said, recalling that a specialist from the Ministry of Education of Finland has already visited Cyprus.

As regards tourism, he said that almost 30 thousand tourists come to Cyprus each year from Finland. “Cyprus is a very famous tourist destination in Finland since the ‘60s and we have many tour operators, who bring here tourists every summer”, he added.

Trade between the two countries is modest but there are a couple of Finnish companies working here. We are working with a view to deepen bilateral cooperation, the Ambassador stressed.