Fatal road accidents: how does each EU member state compare? 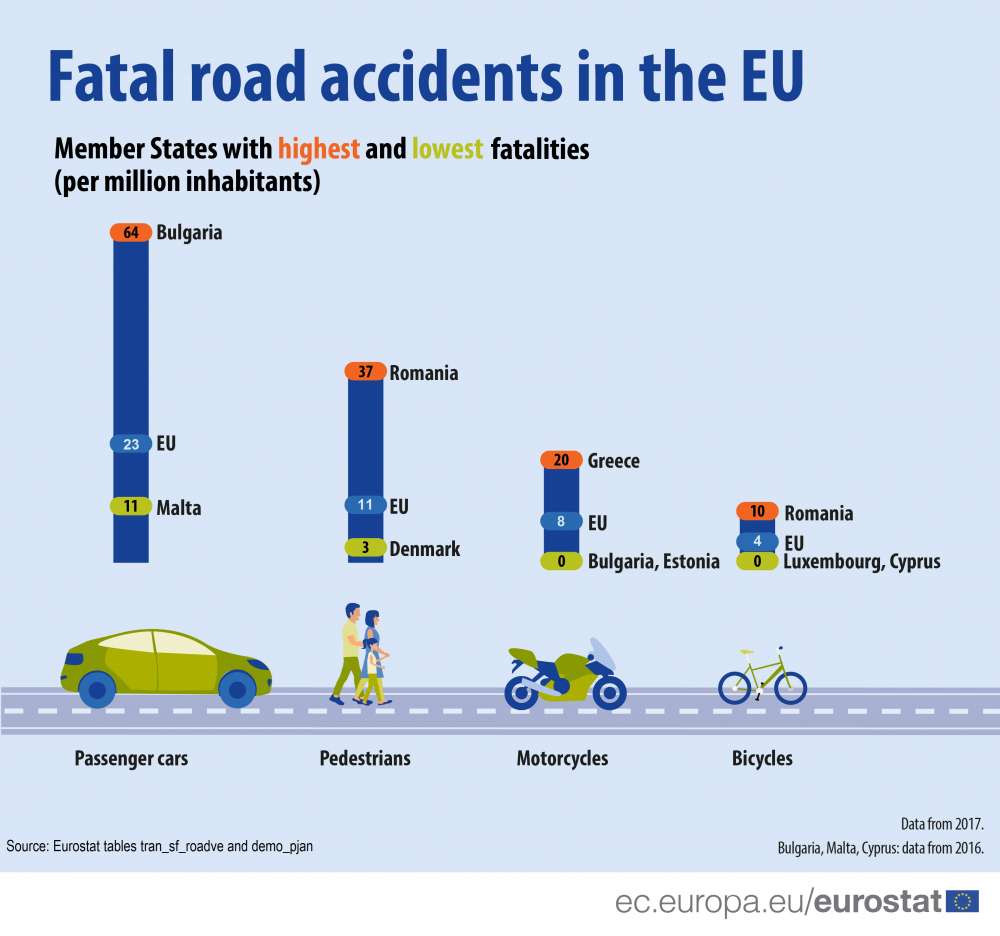 Cyprus and Luxembourg had the lowest rate of cyclists killed in road accidents at zero per million of inhabitants according to figures released by Eurostat on Tuesday.

Cyprus figures are for 2016 as figures for 2017 were no available, Eurostat said. It added that overall the number of fatalities recorded in road traffic accidents in the EU is estimated to be around 25,000 in 2017, corresponding to 50 fatal accidents per million inhabitants.

Passenger car deaths accounted for almost half (46%) of all fatal road accidents in 2017, followed by deaths of pedestrians (21%), motorcyclists (15%), bicyclists (8%) and deaths involving other forms of road transport (10%).

In the EU Member States, Bulgaria ranks highest in the passenger car category with 64 deaths per million inhabitants (2016 data), which is almost six times the lowest rate, that of Malta (11, also 2016 data).

The rate of deaths among pedestrians in road traffic accidents is highest in Romania (37 deaths per million inhabitants) and lowest in Denmark (3).

Greece has the highest rate of fatalities in relation to motorcycle accidents (20 deaths per million inhabitants) in 2017. This contrasts with the situation in Bulgaria (2016 data) and Estonia, where the rate is zero.

Finally, regarding the number of cyclists killed in road accidents as a proportion of the population, the highest rate is in Romania (10 deaths per million inhabitants) and the lowest rate is zero, recorded in Cyprus (2016 data) and Luxembourg.

Note: The data are for 2017 unless otherwise stated and have been extracted from the CARE database (the Community database on road accidents resulting in death or injury). CARE contains detailed data on individual accidents collected by the Member States from police and hospital sources.

The source data can be found in Eurostat tables tran_sf_roadve (number of persons killed) and demo_pjan (number of inhabitants).

By In Cyprus
Previous articleRussian loan to be repaid in early September
Next articleUS considers Yavuz activities unlawful, urges Turkey to remove drillship