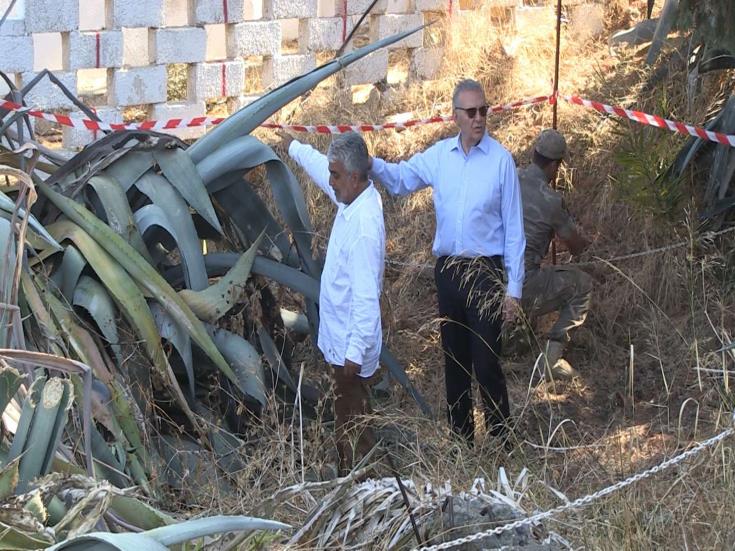 Excavations aiming to locate the remains of Greek Cypriots killed during the Turkish bombardment of Tylliria area in August 1964 began on Wednesday. The search will focus around the location of a makeshift hospital in Pachyammos that was hit with napalm incendiary bombs.

Presidential Commissioner Photis Photiou, who visited the site, said in statements to the media that the excavations aim at giving answers to the families of the people who were killed. The excavation works are estimated to last for about a month. Experts do not expect to locate complete skeletons due to the intensity of the bombardment and the use of napalm.

Photiou said that the search is undertaken in the framework of the Republic of Cyprus excavations and exhumation programme, stressing that the state has the legal and moral obligation to hand over the remains of those killed to their families so that they can bury them according to their religious beliefs and their traditions.

We are here today because 55 years later we must carry out this excavation because we must provide answers to the relatives’ many questions, Photiou noted. He said that any remains located will be identified through the appropriate scientific tests, noting that the whole process will be carried out by Cypriot scientists.

Asked if they are looking for a specific number of people, Photiou said that they did not wish to say anything in public, and that they will expect to see the results of this operation.

The Council of Ministers decided in July this year to launch the excavation programme in search for Greek Cypriots killed during the intercommunal fighting at Tylliria in the north western part of Cyprus.

Similar procedures were followed at various locations where people known to have been killed in battle had been buried.