Event on future of Europe takes place in Nicosia 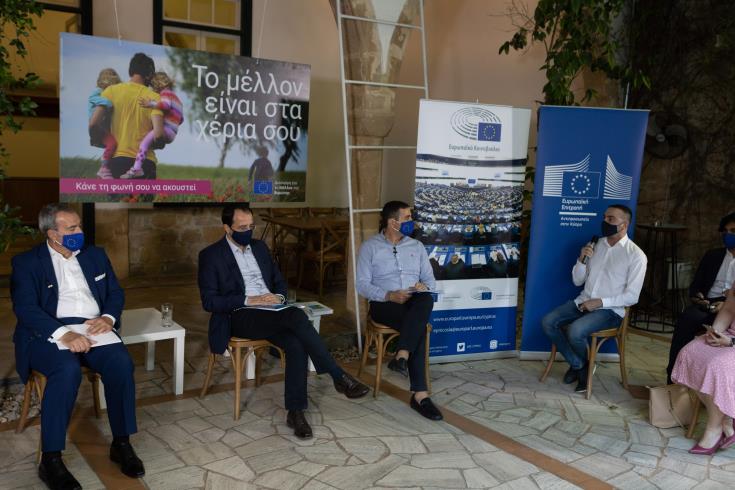 Αn event on the future of Europe took place Tuesday, in Nicosia, marking the start of events in Cyprus, ahead of the Conference on the Future of Europe, as it was presented by the Head of the European Commission Ursula von der Leyen in 2019. The kickoff event on a European level took place May 9, on Europe Day, in Strasbourg.

Young citizens from NGOs, other organizations, groups and associations, from Erasmus and colleges and universities in Cyprus participated in the event and shared views, opinions and concerns on the future of Europe and tabled their positions on major issues of their interest such as unemployment, education, climate change, EU’s foreign policy, Erasmus, housing issues etc. They also raised questions on the pandemic and the role of the member states and the EU, domestic violence, fiscal policy and the migrant crisis.

The event was organized by the Directorate of European Affairs at the Ministry of Foreign Affairs, the office of the European Parliament, the representation of the EC and the PIO.

During the event the participants referred to the platform set up on the Conference of the Future of Europe in 24 languages (https://futureu.europa.eu/) with 9 plus one topics such as climate change and environment, health, economy, youth, culture and education, and migration. The platform is the hub of the Conference and gives the opportunity to EU citizens to speak up, to say what kind of Europe they want to live in and to help shape the common future.

For the first time the platform uses AI and robotics for composition of ideas. For example if a group in Cyprus tables positions on climate crisis and a group in Portugal has similar ideas and proposals, these ideas will be collected and grouped together and will be presented before the Conference on the Future of Europe.

MEPs Lefteris Christophorou and Costas Mavrides will be representing Cyprus at the Conference.

Have your voice heard, FM told the youth

In recent years, the economic crisis, migration, xenophobia and other issues have led citizens to engage in a debate about what kind of Europe they want, the future of our common family, the gap between Brussels and decision-making and citizens, said Foreign Minister Nikos Christodoulides.

In a brief statement he said that this discussion is taking place because the voice of young people should be better heard in the EU and because policies should meet the concerns and expectations of citizens and especially young people.

He said that we are investing in young people and, addressing the participants, said “you are the future and you can lead Europe where it deserves to be”.

Christodoulides said that our accession to the EU was the greatest success of our foreign policy and made special reference to the late Deputy Minister of Foreign Affairs of Greece, and a Cypriot citizen, Yiannos Kranidiotis who had the vision to apply for EU membership.

He said, however, that unfortunately with our accession we failed to realize the significance of being an equal member state and for many years our approach was related to the Cyprus problem and Turkey-EU relations.

This approach, according to the FM, led others to see us merely as a problem. Christodoulides also said that the rotating EU presidency in 2012 was a good lesson for Cyprus because it gave us the chance to see the real benefits of being an EU member.
He added that since then, Cyprus is trying to play an essential role and be a member state that influences and determines the policy making especially on issues where we have added value, such as the Middle East.

He also referred to the set up of the Directorate for European Affairs at the Ministry of Foreign Affairs and the benefits, tangible results and intervention so far.

The Conference on the Future of Europe is not a bureaucratic exercise in Brussels, says Papadopoulos

The Head of the EC representation in Cyprus, Ierotheos Papadopoulos, stated that the benefits of accession were indeed seen with the Cyprus` EU Presidency and this did not happen only with Cyprus, but with other member states as well.

He added that if we raise only one issue at the table in Brussels, then we are isolating ourselves or others isolate us, but if we participate with ideas and suggestions, then we definitely have a lot to gain.

He referred to the vision of the President of the Commission and her priority for the Conference on the Future of Europe, which was delayed due to the coronavirus crisis. Papadopoulos said that the EU is our common family and all citizens and organizations have the opportunity to say what they want, their priorities and how the EU should be.

He referred to the operation of the platform and explained that the Conference on the Future of Europe is not a bureaucratic exercise in Brussels, but an attempt to get people to really tell us what they want. This, he said, is a citizens` forum taking place in the EU for the first time and we believe it will be a successful exercise, with results that will inspire our leaders.

This is a great opportunity for people to speak up, said Kettis

The head of the EP Office in Cyprus Andreas Kettis referred to the uniqueness and importance of the project that gives citizens the opportunity to contribute with ideas and proposals.

He said that very often everyone talks about the democratic deficit and the goal is to see how it decreases and how Brussels and the EU institutions come close to the citizens. Kettis said that the EU is us and the EU is a living organization in which citizens have a say and can shape the future through change and reforms.