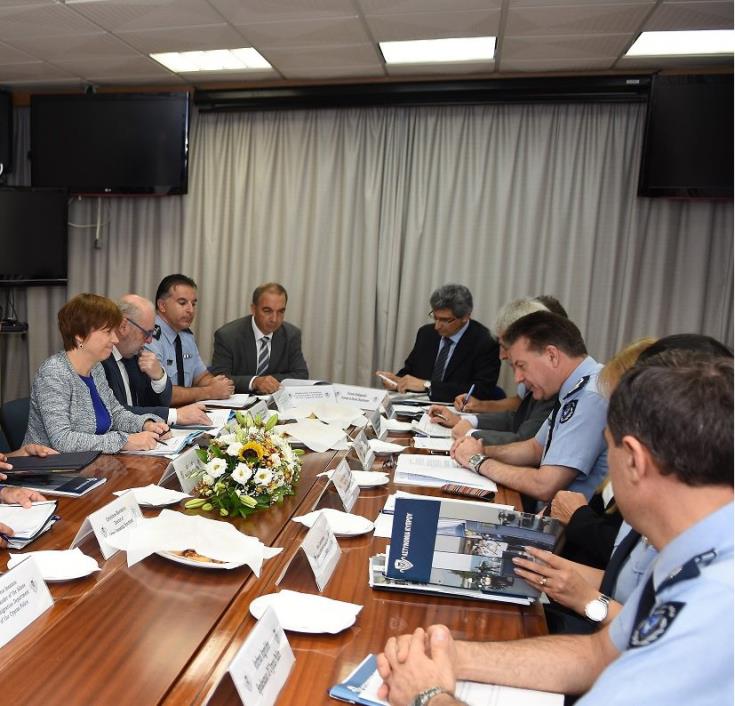 Cyprus is a leader in dealing with the increasing challenge of cyber threats, but whatever the crime might be, Europol is committed to continue supporting the Cypriot authorities in their fight against organised criminality affecting the island itself and Europe more widely, Europol Executive Director Catherine De Bolle told Cyprus News Agency.

De Bolle was appointed Head of Europol last March. She previously served as Commissioner General of the Belgian Federal Police. In her first months at the helm of Europol, she made it a priority, as she told CNA, to listening to Europol’s main stakeholders – law enforcement in EU Member States.

The new Executive Director visited Cyprus recently and held meetings with the Cyprus Chief of the Police and the Minister of Justice and Public Order, covering a range of topics from cyber-security and cyber-crime to terrorism, human trafficking and drugs. In her interview De Bolle pointed out that Cyprus takes the threat of cyber-nncrime very seriously and she praised the expertise Cyprus has built in this area.

“I have been busy touring Europe to meet with the chiefs of police and listen to their expectations ahead of the annual European Police Chief Convention that Europol will host later this year. It is important for me that Europol is supporting law enforcement in the field by being responsive to the operational needs and concerns of the Member States. Europol has achieved very significant operational results in the past few years, but this is only possible working with police in the Member States. In line with this, I have carefully listened to the views of the Chief of Police on the work of Europol. Cyprus is a valuable and reliable partner for our Agency,” she told CNA.

Replying to a question about the fight against terrorism and how the Member States cooperate, given that sharing of information and coordination is essential, De Bolle underlined the fact that Cyprus experiences lower crime rates than the rest of the EU and terrorism is not one of the main concerns.

She said that because of its geographical location, the migrant crisis also affected Cyprus, adding that “people smuggling is probably one of the main crimes on the island.”

Europol Head made special reference to cyber-crime, saying that “Cyprus is a leader in dealing with the increasing challenge of cyber threats.”

“But whatever the crime might be, we are committed at Europol to continue supporting the Cypriot authorities in their fight against organised criminality affecting their country, and Europe more widely,” she underlined.

CNA asked De Bolle to assess the investment of the Cyprus Police in its capacity development to fight cyber-crime, having in mind that cyber-crime is on the rise and many critics argue that the Police in general, not only in Cyprus, invest too little cin tackling it.

De Bolle noted that Europol does not have direct visibility on the level of investment in each Member State in relation to criminal investigations.

“However in my discussions with the Police Chief and the Minister (of Justice) it is clear to me that Cyprus takes the threat of cyber-crime very seriously. We discussed how best European Cyber-crime Center (EC3) can support the Cypriot Police and how we might make use of the expertise Cyprus has built up in this area,” she said.

She did point out that capacity building is a crucial component for addressing cyber-crime effectively and added that while Europol’s main goal is to provide operational support to combating cyber-crime, the agency recognises the need for supporting the capacity building efforts, especially focused on the law enforcement community.

“As such, Europol’s Cyber-crime Centre delivers three signature cyber-crime training courses for each of its mandated cyber-crime areas (Combating the Online Sexual Exploitation of Children, Payment Card Fraud Forensics, and Open Source Forensic IT). Europol’s EC3 is also actively collaborating with CEPOL (European Union Agency for Law Enforcement Training), ECTEG (European Cyber-crime Training and Education Group) and other key players, towards joint cyber-crime training modules and programmes and has also delivered training to Cypriot law enforcement on matters such as mobile phone analysis, crypto-currency investigations, among others,” she said.

According to Europol Head, whether the investment into capacity building is enough on Member State level is a determination that each Member State has to make for itself.

“We prefer to focus on how we can contribute through providing these training sessions and sharing our knowledge and expertise across all Member States,” she said.

By In Cyprus
Previous article
Red alert from Forestry Department as temperatures soar to 41 C
Next article
Manafort had $16.5 million in unreported income, court told