EU officials in Turkey for talks with Erdogan, Cyprus problem also on the agenda 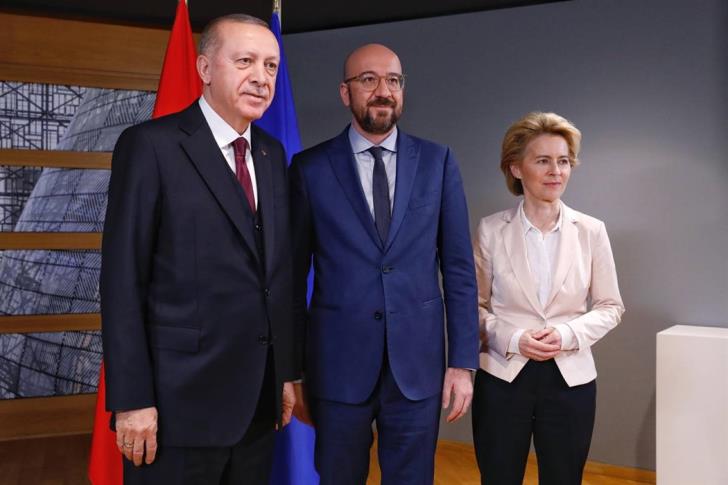 Nicosia is waiting to see the outcome of the visit to Turkey on Tuesday of European Union Council President Charles Michel and EU Commission President Ursula von der Leyen as calls for sanctions against Ankara are growing.

The EU officials will meet President Recep Tayyip Erdoğan with the Cyprus problem and explosive situation sparked by Ankara’s drilling provocations in the eastern Mediterranean also on the agenda.

Brussels have announced that the visit is part of the efforts to increase dialogue between Ankara and Brussels following a tense period last year due to the eastern Mediterranean.

An EU official also said that Tuesday’s meeting “will not be the moment for negotiations, but will provide a framework” on the way forward.

The bloc has been encouraged by somewhat positive moves from Ankara over the past few months, including the resumption of talks with Greece over a disputed maritime border and steps to restart United Nations peace efforts for divided EU member state Cyprus.

Cyprus is divided since 1974 following an invasion by Turkey which still maintains troops in the breakaway north of the Mediterranean island.

EU members have been split over how to handle Turkey, with Cyprus, Greece and France urging a tough line while others, led by economic powerhouse Germany, want more engagement.

Two weeks ago, Turkey said it would continue to work with the European Union on a positive agenda outlined by Brussels that includes the renewal of the migrant deal, upgrading the customs union and visa liberalization.

The Union had revealed a comprehensive report on ties with Turkey that suggests opening a path for improved cooperation in the mentioned areas but also imposing sanctions if Ankara changes its behaviour in the Mediterranean dispute.

The EU will seek the renewal of the 2016 migration deal with Turkey, reached in a bid to stop irregular refugee flows and to improve the conditions of Syrian refugees in Turkey.

Brussels’ “carrot-and-stick” approach entails the possibility of modernising a Customs union, liberalising visa rules, more money for Syrian refugees and a resumption of high-level dialogues on topics ranging from security to health.

But any steps would be “phased, proportionate and reversible”, and if Ankara backtracks then the EU has warned it could slap painful sanctions on the country.

Convincing the Turkish leader to accept the conditions will not be easy and he has already pressed the EU to move faster towards “concrete results”.

But analysts and diplomats say Erdogan has become more pliant in the face of economic woes at home and a toughening line from Washington after his ally Donald Trump was voted out of the White House.

Ankara formally opened talks to join the bloc in 2005, but that process has become frozen as Erdogan tightened his grip over the country.