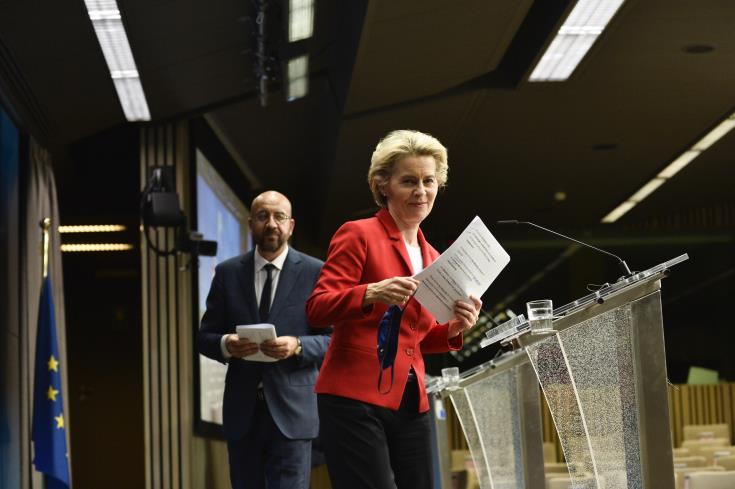 EU leaders agreed on Thursday night on a dual approach towards Turkey and the Eastern Mediterranean, expressing on the one hand solidarity with Greece and Cyprus, while maintaining the option for sanctions, and extending on the other hand a positive agenda to Turkey, while saying that they will monitor developments until December.

More specifically, the 27 EU heads of states and government taking part at the European Council, in Brussels, agreed that “the EU has a strategic interest in a stable and secure environment in the Eastern Mediterranean and in the development of a cooperative and mutually beneficial relationship with Turkey.”

“Pursuing dialogue in good faith and abstaining from unilateral actions which run counter to the EU interests and violate international law and the sovereign rights of EU Member States is an absolute requirement in this regard. All differences must be resolved through peaceful dialogue and in accordance with international law. In this context, the European Council reiterates its full solidarity with Greece and Cyprus, whose sovereignty and sovereign rights must be respected” the Council Conclusions note.

The EU welcomes the recent confidence building by Greece and Turkey, as well as the announcement that they will resume their direct exploratory talks aiming at the delimitation of the Continental Shelf and Exclusive Economic Zone of the two countries. These efforts need to be sustained and broadened, it is added.

At the same time, the European Council strongly condemns violations of the sovereign rights of the Republic of Cyprus “which must stop.” The European Council calls on Turkey to abstain from similar actions in the future, in breach of international law. It also underlines that the delimitation of the Continental Shelf and Exclusive Economic Zone should be addressed through dialogue and negotiation in good faith, in full respect of international law, and calls on Turkey to accept the invitation by Cyprus to engage in dialogue with the objective of settling all maritime-related disputes between Turkey and Cyprus.

The European Council supports the speedy resumption of negotiations, under the auspices of the UN, and remains fully committed to a comprehensive settlement of the Cyprus problem within the UN framework and in accordance with the relevant UN Security Council resolutions, including UNSC resolutions 550 and 789, and in line with the principles on which the EU is founded and notes that “it expects the same of Turkey.” The EU stands ready to play an active role in supporting the negotiations, including by appointing, upon resumption, a representative to the UN Good Offices Mission, it is added.

Provided constructive efforts to stop illegal activities vis-à-vis Greece and Cyprus are sustained, the European Council has agreed to launch a positive political EU-Turkey agenda with a specific emphasis on the modernisation of the Customs Union and trade facilitation, people to people contacts, High level dialogues, continued cooperation on migration issues, in line with the 2016 EU-Turkey Statement. The European Council invites its President, in cooperation with the President of the Commission and with the support of the High Representative, to develop a proposal for re-energising the EU-Turkey agenda to this effect.

Recalling and reaffirming iinter alia its previous conclusions on Turkey of October 2019, in case of renewed unilateral actions or provocations in breach of international law, the EU says that it will use all the instruments and the options at its disposal, including in accordance with Article 29 TEU and Article 215 TFEU, in order to defend its interests and those of its Member States.

“The European Council will continue to closely monitor developments and will revert accordingly and take decisions as appropriate at the latest at its December meeting.

Finally, the European Council calls for a Multilateral Conference on the Eastern Mediterranean and invites the High Representative to engage in talks about its organisation. Modalities such as participation, scope and timeline will need to be agreed with all involved parties, it is noted. “The Conference could address issues on which multilateral solutions are needed, including maritime delimitation, security, energy, migration and economic cooperation” Council Conclusions say.