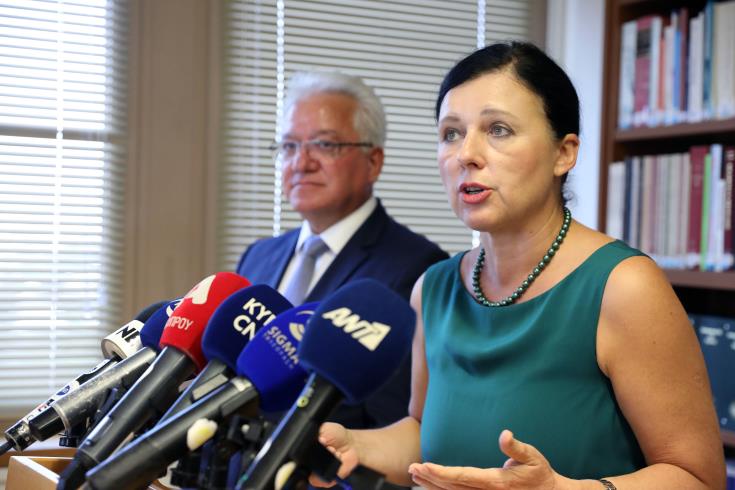 The EU Commission will publish a report in late November, which will include guidelines for member states regarding their citizenship application processes, EU Commissioner Vera Jourova told reporters after a meeting with Justice Minister Ionas Nicolaou in Nicosia on Friday.

The report will contain recommendations to national governments and will set standards on how to carry out checks on people applying for citizenship, Jourova said.

Cypriot technocrats will be invited to work with the Commission before the report is issued.

The Commission is closely monitoring visa and citizenship programmes of member-states, Jourova added. Although the EU respects their rights to provide them, “it cannot remain entirely passive,” she said.

The reason for her visit to Cyprus is to ask questions about how the country’s passport scheme works.“It is in the common interest of the EU and the Member States to introduce preventive measures that will not allow dangerous people to receive EU citizenship,” she said.

Speaking after the meeting, Ionas Nicolaou assured that Cyprus’s goal is not to grant citizenship to persons linked to unlawful activities, such as financing terrorists.

“Cyprus is a regional service centre and we are the first to be interested and care about preserving these services,” he said.

At the same time, he noted that measures beyond those provided by European directives are taken.

Cyprus was subjected to criticism recently over its ‘golden passport scheme’ which awards citizenship to individuals from countries outside the EU, who make substantial investments in the country.

Speaking to the Financial Times last August, Jourova, said that “citizenship for sale” schemes in eight member states will come under tougher scrutiny from Brussels as part of a wider drive against money laundering and corruption.

By In Cyprus
Previous articleLimassol mayor in pledge to step up fight against sea pollution
Next articleMay says Brexit talks have hit impasse, EU must produce alternative plans